Thousands Convene on DC to Rally for Health Care Reform Maybe the front page of your newspaper is plastered this morning with photos of the late great Michael Jackson. But what you REALLY need to know about is the HUGE health care rally that took place a few feet from the U.S. Capitol in Washington, DC yesterday.

An estimated 10,000 people convened on the Capitol to call on Congress to move swiftly and decisively to pass legislation for sweeping health care reform, reform that will help millions and millions of Americans who are uninsured and underinsured. The rally, organized by Health Care for America Now, heard repeatedly from individuals crying out for quality, affordable health care. The placards saying that health care reform cannot wait rose high above the throngs of community groups, labor activists, nurses, doctors, and ordinary people who came from all corners of the U.S. to make their case.

If you aren't following the health care debate, you should be. It affects every single individual in the U.S., and the very bedrock of our ailing economy. As one speaker explained it, it's always been a morally imperative thing to do to provide insurance to all Americans, but now, it's an economic necessity, as our lack of universal health care interferes with our ability to prosper as a nation.

Some 50 million individuals have no health insurance at all. With more and more individuals losing jobs, the number is growing quickly. Millions more people do have insurance but it doesn't deliver when it is most needed. Or, payments are repeatedly delayed by insurers who conveniently hold onto money while dilly dallying paying claims. 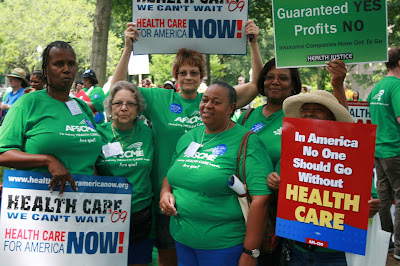 There are horror stories galore from folks whose urgent treatments for serious illnesses are routinely denied by greedy insurance companies who put profits before people.

Among the protesters was a large and readily visible group of physicians wearing white coats and dangling stethoscopes around their necks. Calling themselves the National Physicians Alliance, they called on Congress to implement a system of equitable, affordable, high quality care for all people. One doctor, from West Virginia, said that both his parents have no health insurance. Like so many others without insurance, his mother, who recently suffered from a urinary tract infection, was forced to seek care in the emergency room. 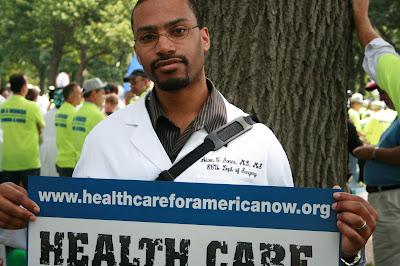 The speakers included actress Edie Falco, who said that her personal health history, and her experience being uninsured, drove her to come to DC to advocate for health reform. Falco stars in the new TV show "Nurse Jackie," in which she plays a nurse. Falco introduced several individuals who have no insurance. One woman spoke tearfully of her experience having to have several toes amputated because her insurer refused to pay for treatment she needed urgently.

Protesters repeatedly cried out for a publically-operated insurance program to compete with private insurers. President Obama has said again and again that a public option is needed to keep health care costs down, and to keep the health insurance industry "honest." The insurance industry 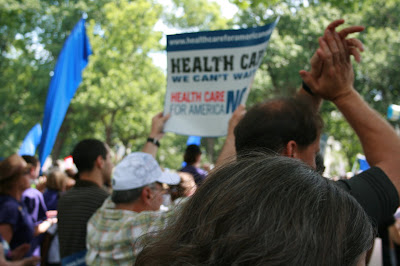 is fighting the idea of a public option, naturally, as they see it as a threat to their unfettered control of the insurance market, a market that serves them up huge profits.
Posted by Claudia R at Friday, June 26, 2009 No comments:

A Snow(e) Job For SURE 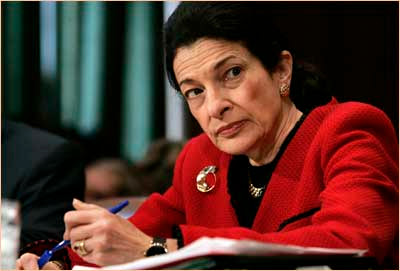 You know the old saying that this or that GALLS me?

Well, I've finally figured where that saying comes from....as in, it comes straight out of the gut.

A few days ago, plagued by fever and a pain -- as the docs put it -- in the upper right flank, I went to the ER for treatment. Turns out my gall bladder was inflamed or infected or whatever, and on Wednesday, out it came in one of those tiny TV camera surgeries they call laprascopy. At many points during this very long and painful week, fevered, in pain, vomiting, dying of thirst pre-op, I still kept thinking to myself, thank God, at least I have health insurance.

I was well enough to come home yesterday and was congratulating myself today thinking gee whiz, I haven't even needed the old pain pills all day long. Isn't that a miracle?

And then a few minutes ago, along came this tidbit of news, courtesy of my husband, Richard Kirsch, who is leading a campaign here in DC --called Health Care for American Now-- to get quality affordable health coverage for every American.

A cornerstone of this program is a public health insurance option -- option being a critically-important word. Consumers would retain a choice. They could keep the private health insurance plan they wanted, OR they could opt for a government plan. President Obama on Wednesday strongly reaffirmed his public support for such a plan. Big insurance companies of course want to block the public plan because, natch, it would reduce their profits.

Last night, Olympia Snowe, Republican of Maine, took a very big step to try to kill the public plan. According to former Labor Secretary Robert Reich (during the Clinton administration) Snow convened the meeting on Friday night among lobbyists for the drug and insurance companies to put off the public option and institute only if health care costs don't go down.

"It's just a way of killing the public plan," my husband said, reading Reich's comments to me from his Blackberry.

This infuriated me. When I think about all the people who would be hurt NOT having a public insurance plan, I just rippled with anger.

Yeah, so, that's what galled me. Literally. That's when my gall bladder, now missing for three days, started to ache.

(And by the way, go read the full article on-line at Politico.com!)

We feel what we feel bodily. Our emotions course in biochemical form throughout our bloodstream, saturating our tissues. Literally, we are awash with emotions of one sort or another. All our cells are affected. And sometimes our language tells the tale.

OLYMPIA SNOWE YOU SHOULD BE ASHAMED. YOU AND THE REST OF YOUR CRONIES. How would YOU feel if YOU had no health insurance? Huh?
Posted by Claudia R at Saturday, June 06, 2009 2 comments: