Now that you know the addiction
(ALWAYS ALWAYS WANTING
WANTING WANTING
MIRACLES MIRACLES HERE
HERE HEAR HERE HEAR
AND NOW NOW NOW NOW)
realize that SERENITY CAN BE
its own miracle.
Steer yourself gently, feel the
Breath in your gut
As an ever so slight breeze
that guides you
to quiet waters, where all
that matters is
the next
breath
and
the
next

IN AND OUT AND IN AND
Watch the way you
breathe, watch
YOURSELF FEEL
yourself 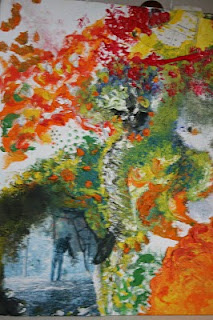 By Richard Kirsch
Just a few days before Alton Sterling and Philando Castile were killed by police officers, my wife and I went to the premier of the play "American Son," which opened in Pittsfield, Massachusetts in June. The play is carefully crafted to leave White audiences feeling the searing pain of finding out that their son was killed by a police officer.
I left "American Son" stunned but then I realized that my grief was one more example of my White privilege. For 85 minutes I had sat through what the parents of Black boys and men live through their entire lives. 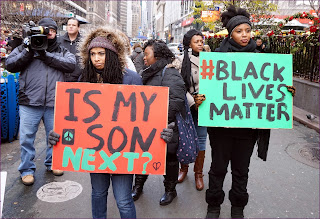 Playwright Christopher Demos-Brown carefully constructs his play to bring privileged White audiences into the story. He adds story elements that intentionally disrupt any neat explanations – life is rarely neat. But no matter how you sort through the contradictions, you are left with the inescapable conclusion that Jamal Ellis would be alive if he were White.
The play takes place entirely in the waiting room of a Miami police station in the early hours of the morning, where Jamal’s parents have gone after hearing that 18- year old has been “detained.” We first meet Jamal’s mother, who is a Black, PhD psychologist. Jamal’s Dad is a White FBI agent. They sent Jamal to an exclusive, almost all-White prep school. His Mom made sure he didn’t talk Black. Jamal is headed to West Point.
We also learn that after Dad left home recently – he’s having an affair – Jamal started to wear baggy pants, grew dreads and is hanging out with other young Black men, whom his parents don’t know.
The day before he was pulled over Jamal had put a “SHOOT COPS with your cell phone” bumper sticker on the back of the Lexus his Dad gave him as a high school graduation gift. His Mom had thought about telling him he had to take the sticker off, but she wanted to give her West Point bound high school graduate permission to rebel.
The cop who pulled over Jamal and his friends is Black and, as it turns out, so is the police department’s public affairs officer, whom his parents have been waiting for with increasing dread. That dread deepened after Dad is emailed a grainy video in which a Black man – does he look like Jamal? – appears to have been shot. Dad explodes in anger when the public affair officer still won’t tell them where Jamal is. He lashes out first at a White policeman and then the Black official and is charged with resisting arrest.
After Dad is taken away for booking, the Black officer sits down with Mom – who has been torn between anger and fear for hours – and tells her she shouldn’t have let her son drive with that bumper sticker, that she couldn’t hide her son’s Blackness no matter how she tried. She listens, her face anguished, and then tells him to “fuck off.”
All the time I’m hoping, believing that Jamal will be all right. Because I want to believe. I have to believe. Because all my life my White privilege – just as Jamal Dad’s White privilege – has protected him from the tragedy of injustice.
Finally, when Dad is released, the police official reads Jamal’s parents the official report. Jamal was pulled over with the two other young men after one of them bought some marijuana. One of the young men started to run and the other two got out of the car. Jamal, according to the report, put his hand on the police car and the police officer started firing at the fleeing boy. A shot went into Jamal’s head, killing him instantly. There will be a full inquiry we are told, as the curtain falls over his stricken parents.
And for a few minutes we are stricken too. Powerful drama puts us in the story, into Jamal’s parents’ shoes. The shoes of educated, privileged parents who are like you but different; they tried to construct a world for their son away from the danger that faced him as a Black man. And could not.
We went home. I turned on the baseball game to break the spell. As painful as that moment was, it was just a moment. As a parent of three kids, I can think of nothing worse than one of my children dying. But Jamal is not my child. While I’m sad and angry when I hear about the killings in Orlando and in France and in Sandy Hook and now in Dallas, I don’t grieve deeply for those families either. My life goes on.
I can go to a nightclub or a café without worrying that I will be killed. But if my 27 year old son were Black I would have been worrying about him every day since he was first old enough to walk out of our door on his own. And that, even at my age, I’d worry every time I got in my car.
What can we Whites do? We can start by speaking out, by declaring that we do have White privilege. And by wearing our White privilege as a weight that never be lifted. A weight we can try to lighten by fighting against the systemic racism that shapes our world.
"American Son" premiered at Barrington Stage Company in Pittsfield, Massachusetts from June 17th to July 9th. It won the prestigious Laurents/Hatcher Award for Best New Play of 2016. Richard Kirsch is Director of Our Story - The Hub for American Narrative. 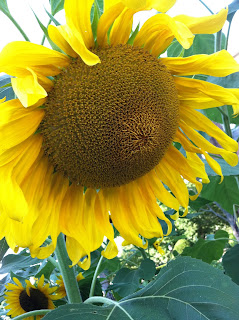 On a morning when I wake up
wanting some kind of miracle
to happen and nothing
in particular
happens
that's when I try just
to watch that desire
and breathe it
away.

And then this
thought occurs to me:
Maybe you are asking
for the wrong sort.
Maybe you don’t need the
flashy miracles where some
glowing angel appears or
you suddenly can fly or
you can speak to the dead
or predict the future
with or without tea leaves.

Maybe the point is
that miracles
are right here in these
fingers creating meaning
out of little black squiggles
tapped onto a white screen.

Or in a sunflower bigger
than a dinner plate.
Or in a smiling baby
with toes like tiny pink pearls.
Feel the gentle air
expanding your lungs.
Smell the pine trees on a mountain –
just because I write the words.

All of it, every single thing
is miraculous
if you take the time to notice.