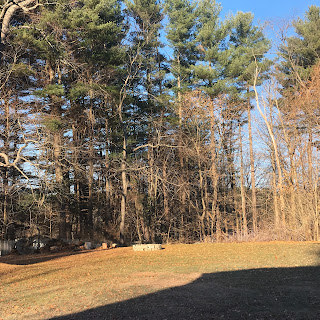 Sunlight on the back lawn.

Gaze serenely out the window.

Hold your breath a moment.

Watch the thoughts that take over.

Breathe.
Posted by Claudia R at Wednesday, November 25, 2015 No comments:

The Miracle that is Modern Technology

It all started with two cups of curried rice.

My husband -- an extraordinary cook -- mistakenly made two cups of rice instead of one. He'd added turmeric so the rice was bright yellow.

When we finished our tofu and broccoli, we wondered what to do with all the leftover rice.

"Can you freeze cooked rice?" he asked me.

"I'm not sure, you better look it up," I answered.

That's when the magic happened. He turned to his cell phone and switched on Google, the person we refer to as "the talking lady."

"Can you freeze cooked rice?" he asked.

It couldn't have been more than 10 seconds later that Google cheerfully announced that you could indeed freeze cooked rice, even if you were only saving it for one day. "Freezing the cooked rice will keep it from sticking," Google said.

I was at the sink washing dishes. "I can't believe this," I said. "What kind of world do we live in when we can get answers to so many questions in the matter of seconds?" It felt like magic to me.

And then this morning I had the same magical feeling. I got up before dawn to meditate and chant. I checked email and there was a message from my sister-in-law Fawn. She and my brother are enjoying an adventure in Italy and Fawn had taken a photo of a fabulous fruit and veggie store. She attached a photo of my brother chatting it up with the owner of the little store. 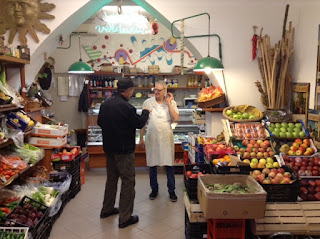 She had emailed us just an hour before (5:15 a.m. our time, 1:15 in the afternoon in Italy.) The email gave me a run of goosebumps. Here was the modern version of a postcard, arriving instantly  --instead of the way it used to be, when the postcards arrived a week or two after you were home from your trip.

I taught a journalism class at Georgetown in 2009. I called it "Journalism Upside Down." In other words, how were blogging and the Internet causing chaos within traditional media outlets. Newspapers were dropping like flies while blogs were flourishing like kudzu.

Imagine this: a student came to class one night and shared an exciting news event involving TWITTER. Senator Claire McCaskill had actually TWEETED (strange word we thought, kind of birdlike) from the Senate floor. We all marveled at this new "social media."

I asked the J-school grad students to consider this question: "Is it possible that at some point in the future we will get serious news from Twitter or Facebook or blogs?" It seemed rather far-fetched at the time, but we took up the question anyway.

And here we are today in a world where cell phone videos instantly make major headlines. Where social media is the breath of life to every political and social cause; where millions of people sign thousands of petitions by email every day; where viral messaging can bring the world's spotlight on horrifying police brutality. Or institutional racism.

The other day, I marveled when I saw a short video filmed as students protested institutional racism at the University of Missouri. The protests brought down Missouri's president. Once again students were showing how powerful social media can be. The protests, according to CNN, "took shape after the student government president took to Facebook in September to complain about bigotry and slurs."

That's what social media can do in the modern age. It is thriving as so many traditional news organizations are withering away.

I had another aha moment when that short video showed protesting students trying to block the reporters and photographers from covering the protest. "Give us some space," the students screamed. "Leave us alone."

Here I was seeing something I never thought I would see: protesters who weren't dying for media attention! Remember all those 1960s marches on Washington -- protesters did everything they could to hook the press. (Remember how the press always played down the number of protesters?)

Today we live in a world where social media makes every single human being with a cell phone a reporter or a photographer or a videographer (those iPhone 6 cameras are amazing!) No longer is news gathering restricted to a select group of media elites. Nowadays every individual's voice can be heard en masse.

Technology has done wonders for democracy.

Who knows were this speed of light technology goes next? I'm fascinated to find out.