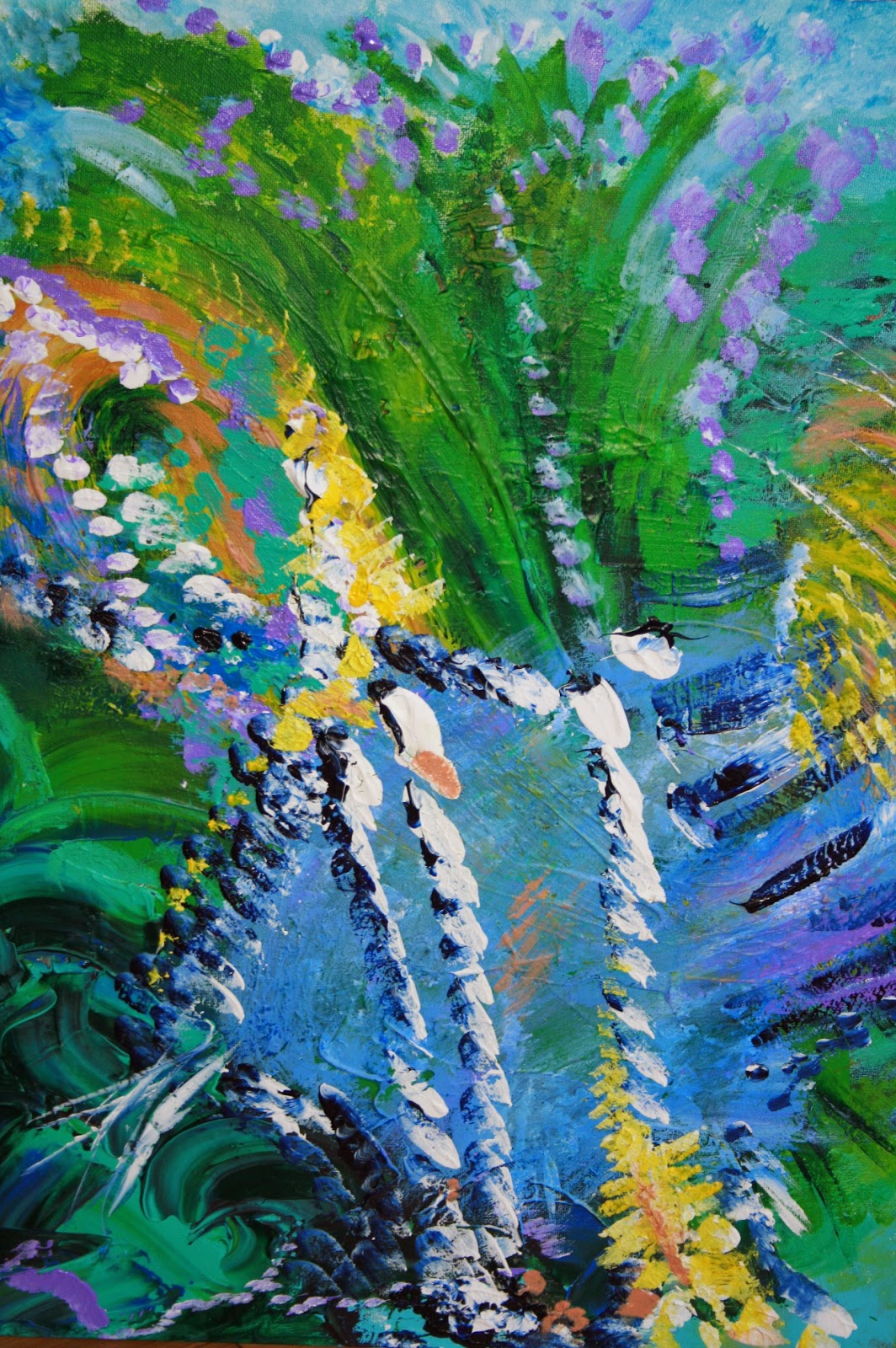 Maybe because so many late winter days are white and overcast,
the dawn of a clear sunny morning brings a thrill.
No matter that there is still frigid air biting your skin if you step outside.
No matter that the sun may not last past noon.
It's still a gift to open your eyes to see the pine-treed hillside outside the window
turning gold in long lazy rays.

Downstairs, the sun streams across the kitchen, bathing the
cabinets orange. The same rays cross the threshold into the laundry room and leave a tiny square of spring green light on the washing machine.
I set my finger into that delightful green spot.
It's got promise, that spot.

The fruitbowl, with its orange, green and yellow curves and shadows, becomes a still life painting.
And in the dining room, the long strips of light spread across the rug beckon to me.
I stretch out flat in one, as if I'm lying in a chaise lounge on the beach.

I stare right into the flood of sunlight coming through the window
and I am delighted to be blinded. I smile. I think Florida, I think emerald waves and long white beaches. Palm trees and the smell of ocean breezes. Bathing suits. Flip flops and suntan lotion and the grainy touch of sand.

Maybe because this morning's light is so rare, and I know there is no holding onto it,
(just now the sun slipped behind the clouds and all turned shadow)

Every place my glances happens to land -- on deeply furrowed grey bark, on the white pond, on green pine needles --
I let my gaze dally.
The day becomes a meditation, eyes feeding on light.

By Richard Kirsch
If Obamacare survives the newest Supreme Court challenge, it will really be the cat with nine lives.
The death of what became the Affordable Care Act has been predicted regularly ever since President Obama’s election in 2008. Right after Obama’s election, I got a wave of calls from reporters, each highly skeptical that the President-elect would really try to get health care passed. When you consider the relentless attacks and near-death experiences ever since, the reporters’ skepticism was understandable.
So when I found myself with a fresh wave of anxiety before the Supreme Court heard oral arguments yesterday on the latest assault on the law, I decided to list all the times that the survival of what became the Affordable Care Act was up in the air. And when I then counted them, it turned out that they number eight. So if Obamacare survives this last, desperate challenge at the Supreme Court, it really will have nine lives. Here they are, in chronological order:
1. The Great Recession: After Obama’s election a chorus of pundits predicted that the new President would have to give up his promise of health care reform because of the economic crisis. Instead, the President worked to get the economic stimulus passed, while paving the ground for health reform moving. Just a few weeks after the stimulus became law, the President went on a national tour to push for action on health care.
2. Tea Party August: The tea party movement came to national attention, with loud, vitriolic attacks on health care at congressional town meetings held by Democrats in August 2009. Republicans gleefully predicted they had killed the bill. But by the second half of August supporters of health reform had rallied at dozens of town hall meetings, usually turning out more activists than the tea partiers. The press didn’t give the same attention to meetings that were not marked by raucous demonstrations. But Democratic members of Congress were sent back to Congress knowing they had support in their home districts to move ahead.
3. Scott Brown’s Election: The surprise election of Republican Scott Brown to the U.S. Senate in January 2010, on a platform opposing health care, looked like it might kill the bill. But having voted to pass the legislation in both houses, Democrats were not going to turn back. President Obama rallied the public by finally attacking the practices of health insurance companies and even without a filibuster proof majority in the Senate, the Patient Protection and Affordable Care Act became law.
4. The Supreme Court Challenge: Immediately after the ACA’s passage, opponents launched a legal attack, which – shocking most legal scholars – was taken seriously by the courts. And by the time the Supreme Court heard the challenge, the odds were that the Court would gut the key provision of the law that enabled insurance to be affordable to individuals. But Chief Justice Roberts saved the day  – and much of the Court’s credibility.
5. The 2012 Election: If the Senate had gone Republican in 2012 – as was widely predicted – and Mitt Romney been elected, Obamacare would have been repealed. Instead, the ACA emerged with a new electoral mandate.
6. Government Shutdown and Congressional Repeals: I hesitated to put the 50 or so Republican votes to repeal the law, culminating in the government shutdown in the fall of 2013, on the list, only because of President Obama’s veto pen. But even if the ACA always had the presidential veto as armor, the barrage of repeal missiles has got to be counted. Texas Senator Ted Cruz led the government shut down before health insurance enrollment opened up because, as he said, “no major entitlement has ever been implemented and then unwound.”
7. Healthcare.gov: And then, with the disastrous launch of the website to enroll people in health care, Ted Cruz appeared to have gotten his wish fulfilled. The ACA might not be legally dead, but much of it was functionally comatose. Then the administration resuscitated the website, and millions were enrolled and started benefitting from the coverage. It looked like, As Cruz feared, the ACA was here to stay.
8. Supreme Court Redux: That is until the Supreme Court agreed to hear a desperate, last minute challenge to ACA’s for millions of newly enrolled people in the King v. Burwell case. Could this be like one of those movies where the soldier survives the war, only to be killed by a bullet on his way home, fired by an enemy that hadn’t heard the war was over?
The news reports of the oral arguments yesterday were encouraging, particularly Justice Kennedy’s raising of a constitutional issue with the plaintiff’s case. And there are a host of other legal reasons to believe that the lawsuit is groundless. But then it did get this far. The opponents have been relentless. They haven’t gotten the message that the war is lost.
In June, we’ll find out if the ACA is the cat with nine lives. Easy to laugh at, if not for the fact that the actual lives of millions of people who rely on the law for life-saving health care are at stake.
Richard Kirsch is a Senior Fellow at the Roosevelt Institute, a Senior Adviser to USAction, and the author of Fighting for Our Health. He was National Campaign Manager of Health Care for All. www.Fightingforourhealth.com. This piece ran first on the Huff Po: http://huff.to/1H0whey and on Next New Deal: http://bit.ly/1NlmKDj