A Love Affair with a Landscape 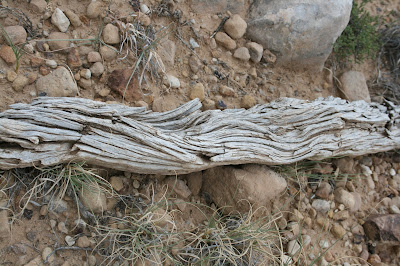 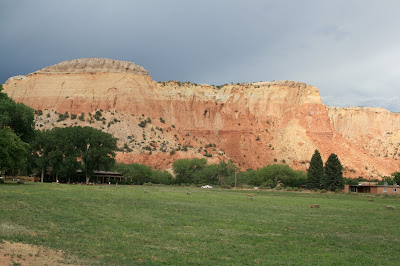 This is a little story about the rather weird thing that happened to me when I visited Abiquiu, New Mexico, where Georgia O'Keeffe had her home and studio.

O'Keeffe first visited New Mexico in 1929. For years, she would leave New York and spend her summers in the stunning red, yellow and grey landscape of the Southwest. In 1940, she bought a small home on a starkly beautiful but desolate site called Ghost Ranch, and five years later, she acquired an abandoned hacienda a few miles away in a tiny village called Abiquiu.

The Abiquiu home, which had been in ruins when she bought it, was finally habitable in 1949, the year she moved permanently to New Mexico. It is perched on a small cliff overlooking the lush Chama River valley. She loved the house in part because of the huge gardens where she could grow loads and loads of vegetables, flowers and all kinds of fruit trees.

She told people that she had to have that particular house because of a particular black door situated in a long adobe wall in the open courtyard where the well sits. She spent years painting images of that door in numerous abstract ways. 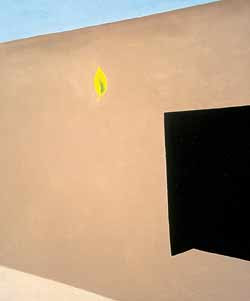 Last week, on a tour of her house and studio, a rather strange thing happened to me in that courtyard, right beside that very door. I've always adored O'Keeffe's work, and decided to travel to New Mexico after visiting an extraordinary exhibit of her abstract work I saw at the Phillips Collection in Washington, D.C. this past spring. (I was also taking a painting class in Taos.)

As our tour began, a fierce wind blew up. We entered the courtyard, and I saw the door, and the tour guide explained O'Keeffe's obsession with it.

Then the guide moved us a few feet into a protected hallway next to what she called "Claudia's bedroom." (O'Keeffe's younger sister Claudia spent many summers at Abiquiu.)

I stood staring at a second door in the courtyard, beautifully greyed and yellowed with age.

I was thinking to myself how that door called to me, maybe in the same way that O'Keefe's door had called to her. I decided at that moment that if I had paint and a canvas in my hands, I would paint that door. What I had in my hands at that moment instead was the flyer for the tour.

Anyway, that's when the weird thing happened. The wind came up, and spilled a small square of black plastic -- probably a shred of a garbage bag -- and the plastic landed right on my foot. I looked down, and the shape of it startled me. I picked it up and held it against the museum flyer with the image of O'Keeffe's door. My heart started doing a bit of double-time. 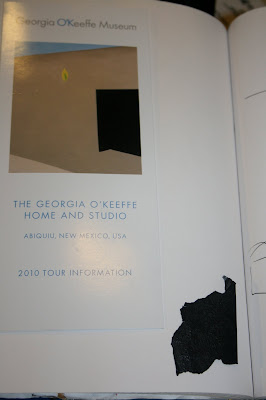 And maybe that's why I started feeling a very personal connection to O'Keeffe as I continued walking through her house.

She kept huge jade plants, just like I do.

She collected small smooth black and white rocks. I have several rocks on my meditation table.

She adored chamomile tea (her kitchen is exactly as she left it, spices and all.)

She believed deeply in the education of young people (I teach college English to underserved students.)

As we stood in O'Keeffe's bedroom, I asked a woman from the village who was helping with the tour whether the local people took kindly to O'Keeffe. The woman smiled. She said that Georgia O'Keeffe had paid for her sister's college education and the education of many other young local people. (She also paid for a water system to be installed in the village.)

O'Keeffe insisted that the students present evidence of their academic performance. The woman told me that she had once accompanied her sister to O'Keeffe's hacienda, where they sipped mint tea while discussing her sister's grades.

That made me smile.

When I got home I couldn't wait to paint. I did a poor rendition of O'Keeffe's landscape. 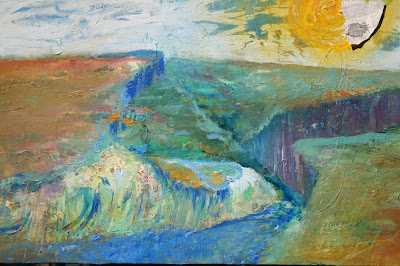 One of O'Keeffe's most famous subjects -- and one she painted frequently -- was a flat-topped mountain called Pedernal. "It's my private mountain," she often said. "God told me if I painted it often enough I could have it." 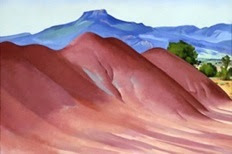 After she died in 1986, her ashes were scattered on the mountain.

To say the landscape is beautiful is a vast understatement. I just hated to leave.

As I prepared to board the plane in Albuquerque, the poster of O'Keeffe with her sassy smile gave me one last glimpse of that amazing artist and her incredible landscape, both of which I adore. 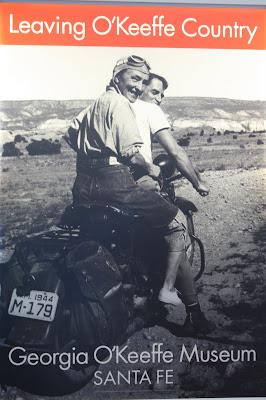 Thank you, Claudia for this lovely tour, with all its surprising connections!