The Dangers of Pedestrian Travel 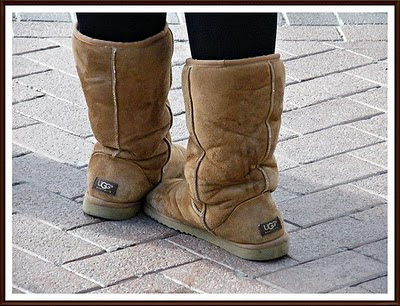 In addition to the unbearable life-threatening cold out here on the University of Wisconsin campus, a reason I do my best to avoid traveling on foot in the winter months is the thick sheet of ice that covers all streets and sidewalks on campus.

The Ugg is standing strong as the most popular winter footwear because of its unmatchable warmth, but what it lacks is traction. Despite this drawback, girls all over campus (myself included) continue to traipse about the streets without a care. Also, the state of Wisconsin refuses to use salt on the roads because of the environment, and sand is by no means an adequate substitute. I have had a few near-death experiences due to this choice, and am considering personally salting the paths that I use most often, Hansel-and-Gretel style. This will also prove useful for anyone who is trying to track me down (crazed blog fans.)

The one positive to the treacherous paths we must travel each day is that spectating the slippers in question is highly entertaining. The moment of panic that strikes when you’re about to have a potential ice incident is a feeling unlike any other. There are a few classifications of slips and falls, as evident through this video and an abundance of real-life experiences.

This classification of slip occurs when you unexpectedly hit a patch of ice disguised under snow. Sometimes you can anticipate and subsequently side-step a GG by watching someone walk in front of you slide, startled. This isn’t too embarrassing because it’s the most common. It also is beneficial in that it will speed up your travel time by replacing some steps.

Sometimes, when encountering a larger patch of ice in shoes without adequate traction, you might have to do a cross-country-skiier-esque shuffle in order get back on track.

This is more embarrassing than the GG, but still something you can recover from. There is little chance that you’ll hit the ground. These are more common on a downhill slope, for example between Statesider and Towers (watch out! happened to me today.)

The “close call” is pretty humiliating. Qualifications for a level CC slip include flailing arms, legs running in place, facial expression of shock, and perhaps a yelp or scream. To follow-up, a survivor of a CC usually looks around in hopes of seeing someone they know, usually unsuccessfully. If you catch the eye of a stranger, hopefully you two can share a laugh. A personal anecdote: I had a terrible CC last year outside of Social Science during prime time. Luckily, my nug-master Reagaroo was in her car right behind me and was able to share it with me.

This is the worst kind of fall. It is usually preceded by a CC, which is the onset of the humiliation. The difference here is that there’s no recovery. A FW can end in a backwards fall or a face-plant. Either option is incredibly embarrassing, and is followed up by pain. Another terrible side effect is that some of your belongings probably went flying, or in the case of a backwards fall, your computer might be at risk. Once you’ve gathered yourself (and probably told 5 to 10 strangers that you’re “fine”), you set off on your journey again. Thankfully it’s probably 5° or less, so your face was beet red prior to CC.

SHOUT OUT TO PEOPLE WHO STILL BIKE IN THIS WEATHER - YOU ARE THE FUNNIEST OF ALL!

But if you wouldn’t mind, please stop biking right in front of me while I’m driving a car, because it makes me very nervous that you’re going to topple over and I will flatten you.

Megan Kirsch is a student at the University of Wisconsin. She keeps a wonderful blog called "Living Outside the Lyre." Check it out and get an inside look at campus life at U of Wisconsin!
Posted by Claudia R at Monday, January 24, 2011