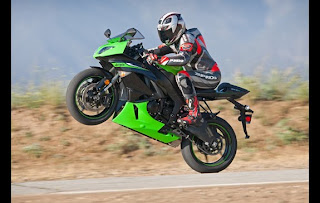 The sun was shining and it was the last nice day of the fall. It was starting to get cold and one could tell winter was coming fast. I really wanted to take my new ZX6 out for its last spin of the season. I love riding motorcycles, but this one I'd bought with my own money so the feeling was even better.

The only problem was I only had a motorcycle permit and that meant I couldn’t drive alone. My father and brother were at work and I didn’t know anyone else with a license.  So I decided I’d just take it out on my own. I'd done it before so it wasn’t a big deal.

I turned the key and she started up and purred like a baby kitten. At that point there was nothing better than that noise, well, except maybe the wind blowing in my face. I strapped on my helmet and was on my way. The weather was just right, a little chilly but the fall sun warmed my skin. I went out for about 45 minutes and was on my way back home. I was speeding, but that's nothing unusual for me on my motorcycle. I was rounding one of the last turns to my house when I saw a cop coming from the other direction. I saw him pull into a driveway and pop his car into reverse. He never turned on his lights but thoughts raced through my head: I knew he was coming for me.

My first thought was to stop but I was less then a mile from home. I knew I could easily outrun him, my bike was much faster and quicker at accelerating than his car. 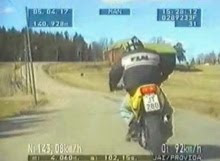 I wanted to stop but I knew if I did I would lose my license and not be able to do one of the things I enjoy the most. So I took off.

I was gone before he could even back out of the driveway. I made it home, hid the bike in the garage, and ran inside. My heart was pounding. I have never been so nervous and scared in my life. I knew the cop had no clue where I'd gone because no one came. I sat on my couch sweating, thinking about what had just happened, when suddenly a cop drove past my house. I live on a dead end road so I knew it wasn’t just a coincidence. But the strange thing was, he didn’t pull into my driveway. I didn’t want to be there so I hopped in my car and drove to my mother’s house.

A few minutes after I got to my mom's, the phone rang. It was my brother telling me there were three cop cars in the driveway and if I didn’t come home right away there was going to be a warrant out for my arrest.  Of course I made the right choice and went back up there.  As I stepped out of the car the police officers were in shock. A 17-year old kid had just outrun and evaded the police. It was kind of weird because they were joking around with me. They told me they knew it was me because of a little skid mark in front of my house. I ended up getting four tickets -- for speeding, reckless driving, failure to comply, and operating out of my class. I felt horrible; I wanted to die at that point. I didn’t feel so bad about breaking the law, I felt bad because I knew I was going to disappoint my parents.

We both knew I was smarter than that. Months later, in court, the tickets were reduced to parking tickets and I had to pay 300 dollars. The fines would have been higher -- over $1000 -- and I would have also gotten points on my license but since I was from a small town I knew respected people in the law enforcement system. And the judge. They both knew I was a good kid and that I'd just made a poor choice. I lucked out, but I won’t make that choice again. Oh, and when I came to college last month, I left my bike at home.

Joshua Dittmar is a freshman at the University at Albany, SUNY. This is his first published writing.
Posted by Claudia R at Wednesday, September 15, 2010

I admire your honesty. I admire more that you had the courage to get it out there for the masses to read and (in most cases) the lashes you will take from the readers.

The best part about this is you didn't get hurt. I've heard of a lot of people getting killed running from the cops. It's just not worth it. You'll get your license back. You'll find a way to pay the fines.

I am sure that you learned a great lesson that day. Please pass this around to as many people as you can and let them know that it's just not worth it.

Josh, you're a little devil. My heart was pumping with yours. I didn't know you had it in you. It's a great story. mk