Will you vote in the mid-term elections in November? If not, why not? 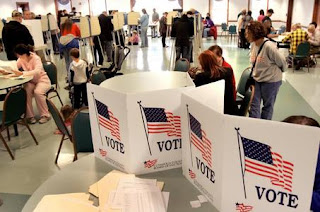 Millions of Americans will stay home this Election Day. Some say it makes no difference who gets elected. Some say it's their way of protesting. Some are so disgusted with the state of the nation that they just can't be bothered getting involved.

Such a different landscape it is than two years ago, when the Obama fervor drove record numbers to the polls.  The Associated Press reported that voter turnout in 2008 reached a 40-year high, with more than 131 million people casting their ballots in the Presidential election, up from 122 million in 2004.

Voter turnout in mid-term elections is always less than in Presidential elections; only about a third of the nation's eligible voters cast their ballots in 2006.

But still, why are so many people saying they will stay home this election when they were so wildly enthusiastic about Obama in 2008? What happened to all that hoopla that carried Obama into office?

The pundits are calling it the "enthusiasm gap." Simply, lots of people who jumped into the political waters in 2008 aren't in the mood for politics now, nor are they so fond of Obama. The enthusiasm has shifted; the people most fired up about voting are the right-wing types who are dead set on booting Obama out of office.

In some cases, the Obama supporters lost their enthusiasm because they also lost their jobs. NPR on Sunday morning interviewed a Pennsylvania woman who voted for Obama in 2008. A year later, in December, 2009, she lost her job. She also lost her health insurance. Speaking in a thick Latina accent to the interviewer, the woman explained that she had grown disillusioned with Obama. Sure, the President had passed a historic health care bill in March, but it was awfully "complicated," the woman said. And it didn't promise to provide her with health benefits anytime soon.

You can't blame her for being discouraged. But does it really make sense for her to bow out of the political process altogether?

It seems a little bit like a love affair; a couple has that six months of absolute bliss, and then reality sets in.  Each person realizes that the other is, well, only human. So at that moment do they go forward, or throw in the towel?

Part of  the reason people have grown so disenchanted with Obama is because they had such pie-in-the-sky expectations of the President when he was elected.  For heaven's sake, Barack was walking on water in those days. We weren't electing a President, we were putting a Savior in the White House (or a celebrity at least.) The way people flooded the streets of Washington, D.C. in January 2009, buying billions of hats, scarves, T shirts, ties, and other memorabilia, you would have thought it was a coronation, not an inauguration.

The rock star celebrity that he and Michelle enjoyed in the period just after the election - their gorgeous, gleaming photos on the cover of every magazine in America - was bound to dry up. And so, now we are left with the reality, and it feels like such a great disappointment. No, Obama didn't fix everything. He brought the economy back from the brink but he hasn't helped the job picture rebound quickly enough.

And so, what President has been a miracle worker?

Certainly he falls short as a leader. He tends to compromise too much. He can't seem to counter Republican obstructionism with an equally passionate vision. He doesn't give us the gut sense that he is really out there fighting for us. He took way too long to get fired up enough to pass the health care bill.

No, he isn't perfect. But does it make any sense to take our disappointment and turn it back into apathy going forward? Discouraged as we are about the political process, does that mean we should decide, oh what the hell, I won't vote.

I don't see the logic. I also see the increasingly likely possibility that with all sorts of Democrats staying home, the populist right-wing tea party types will make their votes count.

And I wonder, how exactly will that help the Latina woman in Pennsylvania who has no job or health insurance and how will it help all the millions of Americans like her?

This piece appeared first in the Huffington Post. The subject of low enthusiasm among Democratic voters was the focus of an article in The Washington Post on Monday, September 27th.
Posted by Claudia R at Sunday, September 26, 2010

It's not so much what Obama (and many other Democrats) have done but rather what they have said (or not said) that has been and continues to be a turn-off for me--someone who a short time ago, listed my political status as, "die-hard Demo."

Until this election time, Democrats did what they pleased with little or no explanation. They helped the big guys because it was going to trickle down to us? I'm a history major. I know that didn't help in the Great Depression. It's not working for me now either.

We have college debt up the wazoo, one kid still in college, and our children living at home with their mates because they can't afford apartments.

I recently asked about a guy who was supporting his son's family after the son lost his job in the financial district of NYC. (It didn't even trickle that far.) It turns out that this guy's wife lost her job and retirement is now over. Another story in my circle of acquaintances: a retired teacher with kidney cancer who had to choose to allow foreclosure on her home in order to keep paying for the health insurance she needs.

Now that it is election time Obama and Biden talk to us and suggest we buck up? Quit whining? That's going to get me out the door to vote? I'm "working" at a volunteer job because it has a stipend. It's the only job I could get. My house is falling apart around my ears, and I can't afford to fix it.

I don't often use Facebook. When I did recently and saw that, "die-hard Demo" there, I was actually embarrassed.

Okay, I will now quit whining. I'll vote when I see something worth voting for. The Latina woman will be in the same position no matter who gets in. I know that for a fact.