The Tale of Two Cookbooks 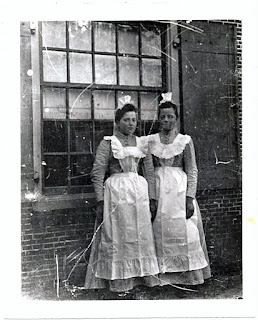 Their pages are yellowed -- no, brown, the paper stiff with age. In handling either cookbook, I have to take care not to let the paper crumble beneath my fingertips. One is a handwritten notebook of recipes collected from friends and relatives in the Mohawk Valley of Upstate New York.

It conjures up images of snow-covered hills, farm country where cows graze in fields where plows may turn up an arrowhead here and there.

The second, written in a foreign language that makes you think of tulips, windmills, and wooden shoes, bears the name of a publishing company in Rotterdam, Holland. The recipes include such food items as aardappelen, wortelen, uien, words which I decipher as meaning "potatoes, carrots, onions."

Both cookbooks are a hundred years old.

The Tale of Two Cookbooks is also the tale of my two grandmothers. The first book -- the handwritten one -- belonged to my Grandma Minnie, who was born on Christmas Eve in 1890. She spent her early childhood along the Erie Canal. Here's a picture of her as a young child on the balcony of the Lock Grocery in Fort Plain:

Minnie couldn't have been more than three years old then. She married my grandfather in 1912. They raised five children: four girls and one boy, who was my father, born at home in Fort Plain in 1920.

The Dutch cookbook belonged to my mother's mother, Grandma Vandenbergh, who was born in the small village of Loosdrecht in North Holland in 1886. As a young adult, Elizabeth worked as a domestic servant for the local pastor, in hopes of saving enough money to pay her passage to America. Here's a photo of Elizabeth and her sister in their maids uniforms, about 1900. Elizabeth is on the right, her sister Hendrina at left. Note the starched caps and neatly pressed aprons:

Elizabeth married my grandfather Barend VandenBergh in 1911, and shortly afterward, they boarded a ship bound for New York, bringing with them a huge and heavy two-volume Dutch Bible -- and of course, Elizabeth's cookbook. 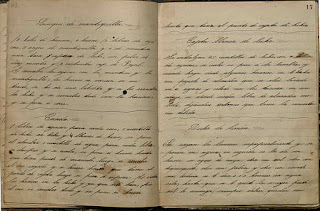 Grandma Minnie's room was at the top of the winding staircase in the front of the house on the hill. The room looked out on the side yard, where a huge magnolia tree with pink marzipan petals bloomed furiously each spring. The front window overlooked the street, giving a view down the hill over the rooftops toward the river.

You could not see the river itself, but in summer you could see the rich green hills on the other side of the river. And you might see tiny black and white dots on the hills, which were cows grazing on the rich green grass. "Side-hill cows," my father called them, with one pair of legs shorter than the other, so they could graze easily and gracefully on the hillside. (At least that's what Dad called them, and I believed that myth well into middle childhood, when I realized it was not genetically feasible.)

The room contained the usual heavy Victorian furniture of the era in which the house was built -- bedstead, dresser, chest of drawers -- and had a built-in closet.

This was also the room in which my father was born, in the summer of 1920. Perhaps downstairs, Great-Grandma Nan was making apple fritters to distract the three sisters who were anxiously awaiting word of the arrival of their latest sibling.

First she brought some apples up from the cellar, where the family stored their fruits and vegetables. She peeled and chopped two apples. Then she sifted together some flour, baking powder, and salt.

She separated two eggs and beat the egg whites until they formed fluffy white peaks like snow. She beat the egg yolks, added some sugar, milk, and the dry ingredients. Then she folded in the puffy egg whites and the chopped apples. She heated a heavy iron frying pan on the wood stove and poured some of the mixture into the pan.

When they were done, she served up the lightly browned fritters.

At some point, Minnie must have added the family recipe to her own notebook. When I tried it myself, I had a bit of trouble with the steps: which to do first, chop the apples or beat the egg whites? Or heat the milk?

Basically, I followed the steps as outlined above. I could have chopped the apples a bit finer than I did, but the fritters turned out pretty well anyway. At least, they disappeared from the serving plate pretty fast. My husband and son enjoyed them with maple syrup; I preferred them sprinkled with brown sugar.

What is a "fritter," anyway, you may ask? According to the American Heritage Dictionary of the English Language, the word comes from French, by way of Middle English: friture means "fried food" in French. So a fritter is "a small cake made of batter, often containing fruit, vegetables, or fish, sauteed or deep-fried."

Interestingly, Grandma Vandenbergh's Dutch cookbook contains a similar recipe for appelpannekoeken, or apple pancakes. This one calls for whole wheat flour, cold milk, hot water, yeast, vegetable oil, salt, and "four large sour apples." I remember eating such apple pancakes when I visited relatives in the Netherlands many years ago. Perhaps I'll have an opportunity to visit again sometime soon.

Until then, I'll be content with Grandma Minnie's sweet and crunchy apple fritters.

Writer Ellen W, who lives in the Albany area, is writing a family history, based on two cookbooks she inherited from her two grandmothers. As is fitting, the Tale of Two Cookbooks website has a post about Thanksgiving today!
Posted by Claudia R at Wednesday, November 23, 2011