A Vast Rose Lighting up the Night Sky 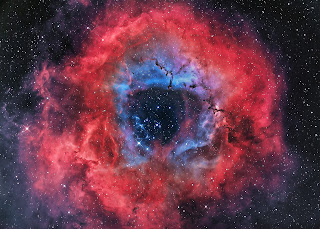 This beautiful sky object, called the Rosette Nebula, sits in the constellation Monoceros, the Unicorn.  The nebula, which measures some 130 million light years in diameter, consists of a cosmic cloud of gas and dust that lies approximately 5000 light years away from earth. It resembles a rose. Massive stars at its core have exploded a hole in the cloud of material. In what looks like the petals, new stars are being born.
You don't have to be an astronomer to appreciate this spectacular formation. Just close your eyes and set the image squarely in your imagination. Try to fathom its size or for a real challenge, its distance from earth. I find that it lifts my spirits just to know that it exists here in the universe. You could say that it puts things in some kind of grand perspective.
Posted by Claudia R at Wednesday, December 26, 2018