THE ABANDONED ONE FINDS HERSELF

It is the second week of October and the morning air is cool and soft and sunny as Leah walks barefoot on the thick grass of the front yard. When the breeze comes up, she lifts her arms out to either side and she feels like she could lift off and fly up toward the heavens.

Leah smiles. She fills the bright blue watering can and waters the new purple and orange and yellow coneflowers. She notes with sadness that the orange cosmos are gone, as is the beebalm, but there are still piles of bright pink and purple and red petunias everywhere. And lots of yellow chrysanthemums and beautiful orange and red lantana near her study. 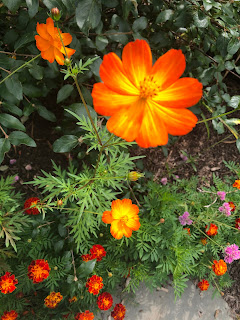 Leah is in her blue bathrobe this morning. She recalls all those mornings last winter when she wore the robe out in the yard, when snow and ice were still piled in the yard. She recalls lying in the snow with and without her emerald green jacket.

She has been many places since those chapters. She has made progress, if there is such a thing, in healing herself. She has faced many truths about her own life, and the lives of her parents and her ancestors. She is happy about what she wrote.

There are still more stories of course. More lessons.  There is the story

The Abandoned One. Her great grandmother Domenica Rotondo.

Mother to her grandfather Claude.

Domenica stayed behind in Italy while all six of her sons, including Claude, came to America in order to find a better life. Claude was only 16 when he left the village of San Giovanni di Paganica, in the Abruzzi region of Italy. It is a village surrounded by the white peaks of the Gran Sasso.

He never saw his mother again. 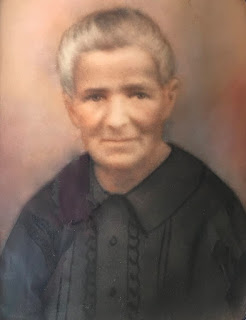 Only one of Domenica's children stayed behind. The only girl in the family, was named Giselda. Every Sunday afternoon, Giselda and her daughter Lauretta had to visit Domenica, who was always so sad.

They had to listen to her moan about the fact that all of her sons had abandoned her. That's how she earned the name La Abandonatha.

Mary points out that Domenica was playing into the stereotypes about women who spend their lives abandoning and sacrificing themselves because of men.

Every Sunday, Domenica’s daughter and granddaughter visited her, but instead of enjoying them, she chose to focus on her sons’ absence.

This is the way it’s always been for women, Mary says. And it’s part of what the feminist movement and the Me Too movement are trying to address.

“Our culture teaches women to abandon themselves.  Women are taught to sacrifice themselves for their husbands and sons. They give themselves and their lives away. And then, when a woman in your great grandmother’s day lost her husband or didn’t marry, she had no man to rely on. Often a widow was forced to rely on relatives, and that was shameful.”

Sometimes, Leah's husband tells Leah that she sounds just like La Abandonatha. Leah moans and groans about the fact that all of her children and grandchildren live far away.

Leah particularly felt like the Abandoned One last Saturday, when Noah, after staying here for four weeks, got in his car and drove back to Denver. Leah cried when he left, and so did Noah. 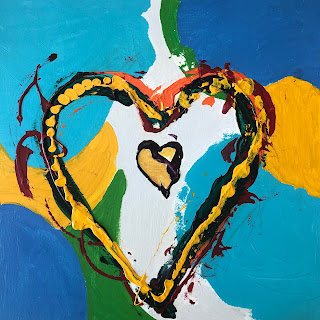 But after a day or two, Leah was OK. She was glad to have back the neat order and peacefulness of her house. She was glad that there were no more mountains of laundry to wash.

Leah has found peace with the idea that her children have their own lives. She's discovered that she can enjoy the life she shares with her beloved husband and her friends and her two sisters who live about an hour away.

And as Mary points out, unlike her great grandmother Domenica, she has email and texts and FaceTime and Zoom, all of which connect her directly to her children and grandchildren.

And so, the frozen feeling is gone. She is warm through and through.

When she feels despair, she stops wherever she is. She sinks into the NOW. She breathes slowly and deeply and she becomes aware of awareness. She chants the vocalizations of each of the chakras. She looks around at trees and birds and flowers and she says to herself, "here are miracles and I am so grateful for all of them."

And when she needs an extra something to stay calm, she makes herself the tumeric and tension tamer tea and adds a spoonful of honey and takes it into the bedroom and does a Yoga nidra routine.

After a half hour or so, she is calm.

she wonders: is this what healing looks like? Is healing ever complete?

Leah got an email from her dear friend Kathy Joy this morning. In it Kathy wrote: "I also hope you know, my friend, that you are enough. You. Are. Enough."

And for once, she feels

I am THRILLED to discover myself in Leah's narrative!
So many juicy lines in here, I want to hold them in my mouth for their flavor and texture: "She breathes slowly and deeply and becomes aware of awareness." "She sinks into the NOW." "Is healing ever complete?"

Thank you for your transparent writing; it invites us all IN.

As always, Kathy, your comments are so exhilarating. And affirming! Thanks for always being there! xoxoxo