For two artists in the region, a pile of fractured tea cups is the unlikely beginning to a story about collaboration, tragedy and questions of transmitting art in the digital era.

The simple encapsulation is that Pittsfield artist Kellie Meisl's collage, "Shattered Cups," adorns the cover of Spencertown, N.Y. author Claudia Ricci's new novel, "Seeing Red." And now, both women's works are drawing eyes around the nation because the self-published "Seeing Red" has become probably the first work of fiction to be serialized in the popular online newsmagazine The Huffington Post.

Ricci and Meisl quickly discovered that their works, created in isolation from one another, shared a collective spirit. Ricci's protagonist, Ronda, is a dancer trapped in and then freed from a difficult marriage. While Meisl originally considered the female image in "Shattered Cups" to be the Greek goddess Artemis, its meaning altered when Ricci, who knew Meisl through a mutual friend, saw the piece on the artist's website.

"It's like the female on the cover is the archetype of any female who's going on a journey," Meisl said. "I really truly see that the female character became the lead in Claudia's novel."

Her long torso tucked into a white negligee, 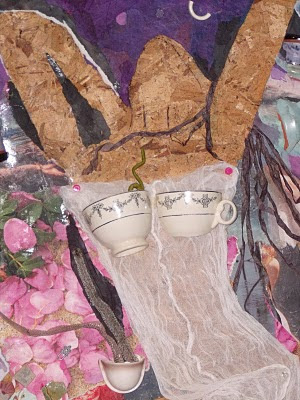 one particleboard arm reaching toward a blood-red sky, the other holding onto her own neck -- the woman in the image binds Ricci and Meisl's artistic visions in a powerful pose of exultation, abandon and passion.

Ricci, a professor of English and journalism at SUNY Albany, said she finds herself revisiting the Berkshires in her fiction frequently. Her first novel, "Dreaming Maples," 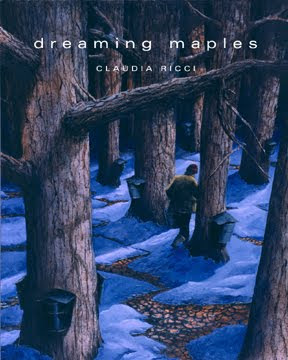 centers around a woman delivering a baby underneath a painting at the Sterling and Francine Clark Art Institute in Williamstown. And in the opening installment of "Seeing Red," a pivotal moment of sexual violence and discovery for Ronda occurs atop Mount Greylock.

"Shattered Cups," too, is rooted locally. Meisl created the piece for the annual Think Pink Breast Cancer Awareness Art Show in Pittsfield in 2009 after being inspired by a couple of accidents.

First, there was the small upset of her china cabinet shelves collapsing, and the heirloom tea cup set she inherited from her maternal line shatteriing.

Then, much more tragically, the teacher of Meisl's son was killed in a head-on car collision minutes after Meisl had seen her at school.

Shaken by this conjunction of crashes, Meisl produced "Shattered Cups" from particleboard, pieces of tea cups, and other found objects as homage to her family, the teacher, and the suffering and strength of those with breast cancer.

As personal as the artworks are, they now also have national significance as pioneers in digital entertainment.

Ricci, who has contributed journalism and criticism to The Huffington Post since 2008, approached her editor in January about the idea of using the forum to share her fiction.

"She told me they have done virtually nothing with fiction," Ricci said, much less a serialized novel.

Her column editor, Nico Pitney, could not be reached for further comment.

On Feb. 6, the first chapter of "Seeing Red" appeared, and new installments are posted about three times a week.

"I wanted to do this experiment online because I think the future of publishing is online or electronic," Ricci said. "I think that paper books or going to disappear--everything is getting more challenging, more expensive."

Ricci hasn't yet decided whether she will end up posting the entire novel or not, but she is confident she'll be putting up material through at least the end of March.

Give away her work

Some of her ambivalence derives from the fact that friends and colleagues have questioned her decision to give away her fiction "for free," she said.

"There was a big, big dream for many years that I was going to become the next Barbara Kingsolver, but the number of people who get in the category of financially successful writers is very small," Ricci said. Instead, she's come to terms with the fact that fiction writing will be a non-lucrative passion. She's happy if, with her self-published novels, she breaks even.

Even so, Ricci sees AOL's recent purchase of The Huffington Post as auspicious for her goal to bring more fiction to the site.

"If the line between journalism and entertainment is blurred, let's not fight it," she said. "Let's figure out a way to give the reader both."

This article appeared in the Lifestyles section of The Berkshire Eagle on Sunday, February 27, 2011, and on-line at the Eagle at http://www.berkshireeagle.com/ci_17492728.

This kind of recognition takes my breath! Congratulations for being the vanguard of the future of publishing (and writing)!
-Lynn