The Way you THINK Can Physically CHANGE YOUR BRAIN! 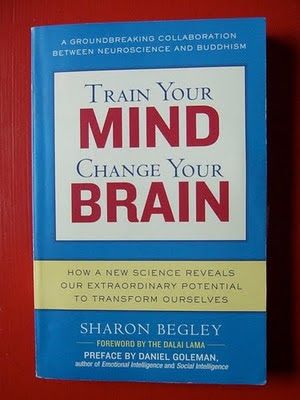 By Claudia Ricci
If I could recommend only one book from my Happiness class, it would be science writer Sharon Begley's text, TRAIN YOUR MIND CHANGE YOUR BRAIN. (Students are reading Begley's book this week for the class.) If you only had time for one chapter, you could read the opening and take away some incredibly important -- and hopeful -- information.
The premise of the book is very simple: MENTAL ACTIVITY CAN PHYSICALLY CHANGE THE HUMAN BRAIN FOR THE BETTER. It is a revolutionary concept, and it is no New Age pie-in-the-sky promise.
The research laid out in the book is cutting-edge, and it's coming out of some of the most prestigious neuroscience labs around the country. What is perhaps most astonishing about the research is that it is being conducted by researchers IN COLLABORATION with the Dalai Lama and other Buddhist monks who are long-time practitioners of meditation. Much of the collaborative research is generated by dialogues between scientists and Buddhist monks who belong to a professional research organization called the Mind and Life Institute, based in Colorado.
What the scientists are finding in the labs as they "wire up" and study the brain activity of the Buddhist monks through functional MRIs (a way of picturing the activity of the brain), is that the long-term practice of meditation and mindfulness dramatically changes the brain for the better. In one set of experiments, researchers found sharp increases in gamma waves in the brains of seasoned meditators, suggesting "the power of mental training to produce a heightened brain state associated with perception, program solving and consciousness."
This heightened gamma activity, curiously, was present in the monks' brains even when they were NOT meditating. The more hours the monks had meditated, the stronger was the baseline gamma reading.
The monks' brains also showed a greater activity in those portions of the brain associated with generating compassion for others.
For years, the prevailing wisdom among scientists, as well as the general public, was that the adult brain was, in the words of a famous Spanish neuroanatomist named Santiago Ramón y Cajal, "fixed, ended and immutable."
As late as 1999, neurologists writing in Science magazine declared that no new brain cells (neurons) could be generated in the adult brain, and that the functions assigned to different portions of the brain were fixed and not changeable.
If something happened to damage that part of the brain that controlled the movement of your left arm, for example, well, then, so be it. You couldn't expect another part of the brain to morph in such a way that it took over the control of the left arm.
New research has now disproved that old dogma of the fixed and immutable brain and instead shown that the brain has enormous plasticity. "The brain," suggests Begley's book, "can adapt, heal, renew itself after trauma, compensate for disabilities, rewire itself to overcome dyslexia, and break cycles of depression and obsessive compulsive disorder."
There are suggestions coming out of the research that the corollary is true, that negative thinking can change the brain for the worse. Researcher Fred Gage at the Salk Institute suggests that the hippocampus -- a seahorse-shaped part of the brain which plays a role in processing memory and emotions -- is shrunken in the brains of depressed people. (Of course it could be that the physical dictates the emotional.)
This is a book worth reading, because the implications are enormous. For older adults, it suggests that keeping active, and challenging ourselves with mental activity -- playing piano, for example -- well into our advanced years, have direct benefits.
The findings also offer hope for people who suffer from depression and other mental illness, like obsessive compulsive disorder. The book offers direct evidence that by learning new ways of thinking -- particularly mindfulness, which is really awareness -- we can rewire the physical meat of our minds.
"By thinking differently about the thoughts that threaten to send them back into the abyss of despair, patients with depression have dialed up activity in one region of the brain and quieted it in another, reducing their risk of relapse. Something as insubstantial as a thought has the ability to act back on the very stuff of the brain, altering neuronal connections in a way that can lead to recovery from mental illness and perhaps to a greater capacity for empathy and compassion."
There is no way to summarize all of the findings that this book lays out. It is full of details about all of the animal research -- on rats, monkeys and ferrets -- that led up to discoveries about the human brain's potential. And while much of it is scientific, the way it's written -- in a lively engaging tone with a lay audience in mind -- all of the research is accessible. Certainly, it isn't the only text on this exciting new nexus of research, connecting neuroscience and Buddhism. 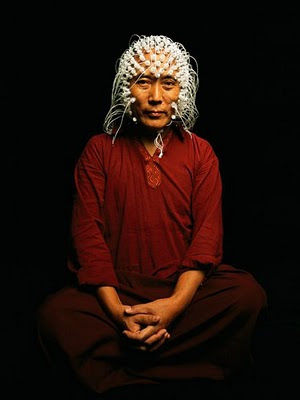 This new view of the brain as a highly-mutable organ, is being widely circulated. (National Geographic did a long piece, for example.) But I am particularly impressed with Begley's book, and so are my students.
In June, the Mind & Life Institute's Summer Research Institute will be held in Garrison, New York. Previous summer conferences have been held in Dharamsala, India and Washington, D.C. The summer conference brings together investigators (and graduate students) in neuroscience, psychology and medicine, as well as scholars and mindfulness practitioners. The scientists present and discuss new research on mindfulness and neuroscience; they also engage in meditation practice.
It is difficult to get admission to this popular conference; a wonderful student in my Happiness class has applied for "admission" to the summer research institute. Trevor Williams, who recently graduated from RPI with a degree in biochemistry, and who is planning to apply to grad school in either neuroscience or psychology, recently asked me for a letter of recommendation for the conference. I wrote the letter.
Lenore Flynn, who is teaching the weekly mindfulness "lab" portion of our class and doing a fabulous job, has also applied as a research fellow.
I'm keeping my fingers crossed that both of them get to go. And when they come back, I'm hoping they'll share with me some of what they've learned.
Posted by Claudia R at Saturday, March 05, 2011