Father, Here is a Different Daughter 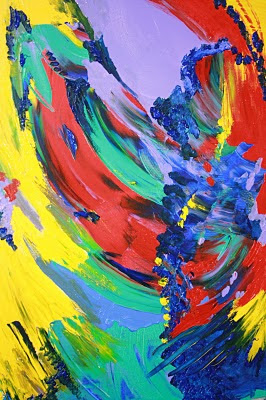 Note to Readers: In yesterday's post, writer Taina Wagnac wrote the "true" story of her first encounter with her father when she was ten years old. Today, Wagnac experiments with a writing exercise called "flipping the script," that is, writing the story from another perspective, transforming the narrator. Of course, there is the more than one way that a story can unfold, and Wagnac is considering still another revision.
By Taina Wagnac

I was ten years old when I first met my father. I found him sitting in the living room when I rushed home from school that day, my report card clutched tightly in my hand.

My father was wearing a black silk shirt with blue jeans. He had an air of power and strength about him. I had no idea who he was until my mother, who sat rigid in a chair across from him, said “well, aren’t you going to hug your father?”

I was shocked. I didn’t know I even had a father.

The only thing I knew about him was his name, Jean-Mary Wagnac. My mother didn’t keep any pictures of him in the house nor did she ever talk about him. All I knew about him was the fact that he had abandoned me and my mother when I was just an infant. A rush of anger crashed upon me like a tidal wave and my blood began to boil.

“I don’t have a father,” I said, my voice trembling slightly.

“Taina, don’t you talk to your father like that----” my mother began.

“Or what?!” I yelled, “He’s been out of my life for ten years, that’s a lot of birthdays and first school days. Why come back now?”

“I was young and stupid.” said my dad, “I wanted to come back and get a chance to know you.”

“It’s too late for that. You should’ve been there in the very beginning.” I fumed.

“I am mere human who makes mistakes so I at least deserve a second chance,” said my dad.

“Are you saying that I was a mistake? Was that why you left? Because you and mom didn’t plan to have me?”

“No,” said my dad, reaching out to me, “I just wasn’t ready to become a father.”

“That still goes not give you a reason to abandon your responsibilities.”

“I did not abandon you. Now you listen to me, I am your father so you should address me with respect.”

At that point, I was so enraged that my entire body was shaking. This was not how I had imagined my reunion with my father. I had always thought that during my first time meeting my father, he would embrace me and bring me tons of gifts. He then would explain how he was stranded in a forest with no way to contact my mother. After years of wandering, a helicopter would bring him to safety and he would rush over to meet me. But it was only wishful thinking.

“Respect?” I asked coldly, “Right now, I have more respect for the dog.”

“It’s true!” I yelled back, “How could you let him in? He left us mom!! He left us to go and enjoy his life. Because of him, we had to struggle just to get by. He’s the reason you work two jobs. It’s because of him we live in this dump or that we sometimes go days without eating. Although we’re struggling, we don’t need him. As a matter a fact, we should thank him for leaving. His absence has allowed me to grow into this phenomenal woman that I am now. It made me appreciate and value the things that we have, though they’re not much. You know what? I also feel sorry for him. You missed out on the life of a wonderful daughter. You missed so many events such as my first A, my spelling bee contest and my communion. I was great in all of them and many people congratulated my mother on having such a smart and awesome daughter. That could’ve been you but it wasn’t nor will it ever.”

“What are you talking about?” my ex-father asked.

“Taina, please don’t do this,” my mom begged.

I ignored both of them.

“You had the chance to be in my life and you rejected it. Unfortunately for you, I don’t give second chances. I’ve done well without you and I have a feeling that I will continue to do well. So at this moment, I am officially renouncing you as my father. I want absolutely nothing to do with you. You’ve never been to a birthday nor to any school do events for that matter so don’t start now. Don’t even bother to change my mind for I am stubborn, just like you.”

I took a deep breath, look my father straight in the eyes and for the first time that day, smiled.

“Congratulations Mr. Wagnac, you no longer have a daughter.”

This was the ending I wished had happened.

Taina Wagnac is a freshman at the University at Albany, SUNY. She grew up in Haiti and moved to the U.S. at age 12.