Grandpa Angelo's Irises Have Been Blooming for NINE DAYS!

At first it appeared to be just a little fluke -- an iris that had come from my Grandpa Angelo Ricci's garden back in Bristol, CT, bloomed in my front yard in cold weather on Monday, October 19th. But it has now been nine days. Multiple irises have shot forth from the green stalks, and more blossoms are coming out from other stems. The flowers are standing strong through all kinds of rain and low temps.

Someone pointed out to me that irises -- which take their name from the Greek word for "rainbow," have a long spiritual tradition. The flower can be found virtually in every part of the world, growing naturally and on farms. They have been used as a medicinal remedy for eons. 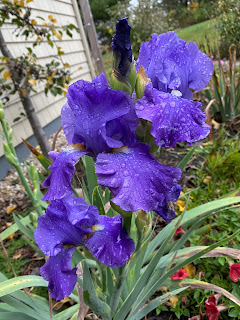 Here is some more history I found:

"The iris’s history is rich, dating back to Ancient Greek times when the Greek Goddess Iris, the messenger of the gods and the personification of the rainbow, acted as the link between heaven and earth. Purple irises were planted over the graves of women to summon the Goddess to guide the dead in their journey. Ancient Egyptian kings marveled in the iris’s exotic nature, and drawings have been found of the flower in a number of Egyptian palaces. During the Middle Ages, the meaning of irises became linked to the French monarchy, and the Fleur-de-lis eventually became the recognized national symbol of France." 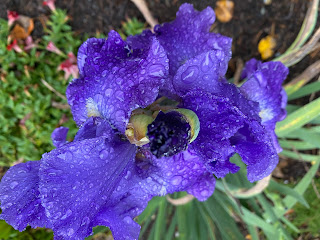 It's this sentence that stands out:

"Purple irises were planted over the graves of women to summon the Goddess to guide the dead in their journey."

Guiding the dead in their journey brings to mind Día de Los Muertos, a holiday which coincides with Halloween, All Saint’s Day and All Soul’s day. These three holidays just happen to be this weekend.

Celebrated in Mexico and other Spanish-speaking countries, Día de Los Muertos pays homage to a person's ancestors. It's a day of celebration, without sadness or ghoulishness or fear. It's a chance to feel close to beloved family members who have passed. It isn't at all like Halloween which spooks us with ghosts and skeletons, reminding us that death looms. Instead, Día de Los Muertos celebrates life and reunites in joy with our loved ones, using music, dancing, food and processions. 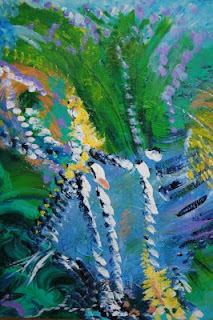 I've invited my family to come for dinner on Sunday, and I'm planning to make spaghetti and meatballs in honor of my Italian tradition. I will place my parents' and grandparents' photos on a small altar, along with candles and chrysanthemums, the traditional flower. Maybe we'll watch the Disney movie "Coco," which is all about one family's experience with death and Día de los Muertos.

How fitting I would find out about this holiday now, as I have begun celebrating my ancestors as I write the book I'm calling, Heal Leah, Leah Heal. 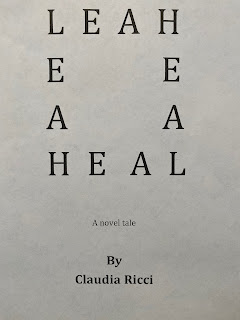 I DID A SKETCH OF THE IRIS A FEW DAYS AGO! 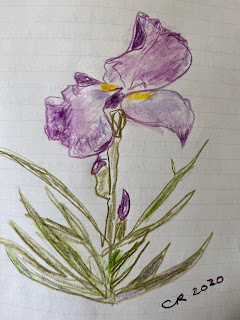 One sad note: I don't know anything about my Grandpa Angelo Ricci's parents or grandparents. That's because my Grandfather's mother objected to my grandfather marrying my grandmother, Albina Orzo. Growing up, we had no contact with his family at all. That just makes me appreciate the rest of my family even more. 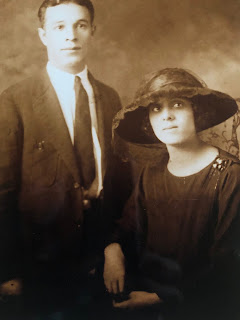 Your sketch of the iris is just glorious!
In it, I see you leaning in close to The Sacred.

HEAL LEAH,
LEAH HEAL ... a book title to catch the eye and engage the heart.

Enjoy the lingering iris; what a blessing.

What an incredible surprise to find your comment on this blogpost I just put up. I am so grateful to have your reaction to the HEAL LEAH
LEAH HEAL image. I know when I first put it on paper it grabbed my eye and immediately started to draw out insights. Thanks too for praising the sketch. I don't think it's the best, but it serves the book at this point. I'm tempted to do a full acrylic painting of the PURPLE IRIS the petals of WHICH RESEMBLE PURPLE FLAMES!!!!

Claud, that is lovely and filled with hope and joy. I did not know about Día de los Muertos, but I will think about it now. I will think about my parents and biological mother and grandparents, and I will do it with celebration, thanks to you. I find the blooming irises mind-blowing. Thanks so much for writing about and sharing this synchronicity.

Hi Reen,as always your comments are a treasure to me. I'm delighted to introduce you to Día de los Muertos. It takes the sting and darkness out of our loved ones passing and puts us on track to celebrate life day by day. You are someone who knows how to do that, you are thoroughly in the celebration mode. I'm glad you will do that with your parents and biological mother. And isn't the iris growing in October a kick? I'm about to go outside to see how they are faring in the snow!