Guest writer: WHEELS OF MY LIFE by Al Stumph

Writer Al Stumph, of Chatham, New York, resigned from the Maryknoll priesthood while he was a student in Hong Kong. In his wonderful new book, "Wheels of My Life," he writes about all the cars, trucks and motorcycles he has known in his life. He counted more than 50! Here is an excerpt from what Al calls his "biomythography," a literary term coined by poet and essayist Audre Lorde. The term combines history, biography, and myth-making. Enjoy this excerpt (in which Al converses with one of his cars) and then go to Amazon.com and order his book today! 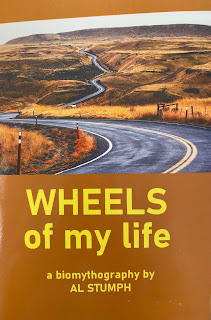