Move to the Desert, Fall in Love with... a Cow? 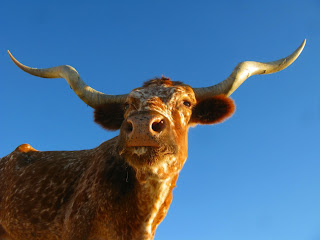 I had a neighbor here in Spencertown (population 1,504) who decided not too long ago to sell his house (I think he got out before the housing market crash). He moved to the middle of nowhere, Texas where he bought himself a chunk of land. Apparently, he is experimenting with a lifestyle that takes him "off the grid."

Except of course for the electricity he's using to fire up his internet connection. He's an avid blogger and in the past two years, he's had nearly half a million hits to his blogsite, The Field Lab, where he gives a running account of life in the middle of nowhere, Texas.  He seems very proud of the popularity of his blog, as he has the visitor counter prominently displayed at the top of his site.


Recently he's fallen in love with a cow. Take a look at Benita here. She's certainly a long-horned beauty.

He has written a poem to Benita, comparing her favorably to all the women (human) in his life who came before and were apparently more trouble than said cow. (See below.)

All this has me thinking about how the internet permits us to live today:

We can be totally cut off physically from others (well except for cows maybe). But we can be connected so intently

She’s a real pretty girl
with big brown eyes
and a heart as wide
as the west Texas skies
found her out on the prairie
that was quite a surprise
My Benita...

She’s a real pretty girl
with big brown eyes
and a heart as wide
as the west Texas skies
our affections are mutual
of that I surmise
My Benita...

This here girl that I got is like no other
she’s had 15 kids, now that’s quite a mother
she sleeps most of the day
eats grass, grain , and hay
of all of my past ones this one is my druther

She’s a real pretty girl
with big brown eyes
and a heart as wide
as the west Texas skies
but in the heat of the day
she is covered with flies
My Benita...

She pees by the gallon and poops by the pound
the queen of the desert and all that’s around
a west Texas longhorn
that moos like a car horn
hooves, fur, a long tail - the best friend that I’ve found

She’s a real pretty girl
with big brown eyes
and a heart as wide
as the west Texas skies
we are of different species
she’s 5 times my size
My Benita...

In this great wide world I have searched long and hard
found the beast in me, my reputation is marred
by those big brown eyes
and the wide Texas skies
an adopted old longhorn I call
My Benita.
Posted by Claudia R at Sunday, October 24, 2010