The Story of a Sculpture, the Mermaid "Awareness" 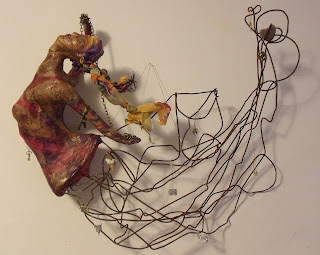 This story begins when a twisted mass of wire washed down the brook behind my house and was retrieved by my husband. He carried the rusty, tangled form right past me and was heading to the trash bin when I saw “her” and proclaimed, “Steve, she’s a mermaid!”

Hence, “she” was promptly rescued from his arms and placed squarely amongst the flowers in my garden where she lived, relatively peacefully, (barring a few more times, early on, when I had to retrieve her from the trash bin -- before Steve could see her mermaidness, and finally resigned himself to letting her stay.) Years passed and she held her ground with graceful presence alongside the foxgloves and delphiniums.

In the winter of 2010, she started to speak to me -- only at first I did not know it was her voice. That winter, I spent many days in the woods behind my home, often walking along the very brook that had carried the twisted wire into my possession.  On these treks, my mind’s eye began to see a mermaid who seemed to be caught upstream. Because she was exerting all of her energy swimming against the current, she was falling prey to the many hooks that were being cast her way in attempts to catch her. I could see she was in need of rescue and began to formulate a plan.

I walked and listened for many days. One day I decided that I might be able to help release her by bringing her into the light. This, I reasoned, might give her the courage to show her true self to the world. The idea was that she would share her truth with those who had eagerly snatched pieces of her when she was vulnerable and unaware; in honoring her truth, I would be releasing her. Then she would be free to go to the places she had intended to go before she had forgotten to pay attention and had gotten caught upstream.

I spent many more days walking and searching for a way that I could make her visible. Then, one night I had a dream. In the dream, a beautiful twisted tree, stripped of its bark, its branches and roots missing, washed past me in the brook behind my home. I perceived the tree as a beautiful piece of art.

The dream brought many layers of awareness to my life and is still enlightening me. One of the things the dream reminded me was that I had received a gift of art from the very water where the tree had presented itself. The twisted wire mermaid was visible to me! She had been sitting in my garden awaiting her purpose. (The dream also contained my gardens.)

So, the walks, the visions, the dream with the twisted tree, and the rusty, tangled mermaid born of the water all merged, as so often things in my life do since I've learned to follow my dreams and visions. My hands and heart got to work crafting “Awareness” so that she could be seen by others and go on to carry out her true mission, the one she was meant for before all the hooks got in the way and confused her.

“Awareness” was made to honor a particularly great woman, who brought compassionate awareness to others in her quest to heal. This woman gifted us with a glimpse of her truth, raw as it might have been at times, as she bravely faced cancer. She also taught us that when we let go of the illusion of the hooks, we can truly live, we can truly love, and that is key. 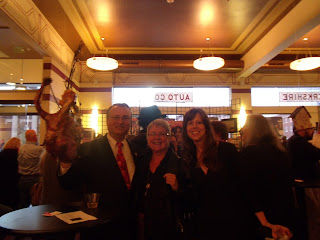 “Awareness,” created in loving memory of Denise Kaley, now resides at Pittsfield’s Colonial Theater, where she is on display for the Think Pink Breast Cancer Awareness Art Exhibit until October 11, 2010.

From there, she will go with the city’s mayor, James Ruberto, to his home in Florida. She was purchased by Mayor Ruberto last week as a remembrance of his wife Ellen, herself an amazing woman, who passed away from cancer in 2009.

Artist Kellie Meisl, who relies on dreams as a springboard for her work, has created most of her artwork over the past decade for community causes. She is an annual contributor to the Think Pink Breast Cancer Awareness Art Exhibit in Pittsfield, Massachusetts, and has shown her work at the Lichtenstein Center for the Arts, where she teaches DreamArt classes in her native Berkshires. In 2009, she published her first book, "Dream Stories: Recovering the Inner Mystic," the cover of which features her first painting for Think Pink, entitled, “Hummingbird Medicine.” Kellie can be reached through her website: www.kelliemeisldreamart.com. She is pictured in the lower photo, (right) with Pittsfield Mayor James Ruberto (left) at the Think Pink exhibit this past week. In the center is Jo Ann Losinger, the Pittsfield woman who bought Kellie's Think Pink submission last year, a marvelously creative collage called "Shattered Cups." Stay tuned for more on that wonderful work of art!
Posted by Claudia R at Sunday, October 03, 2010