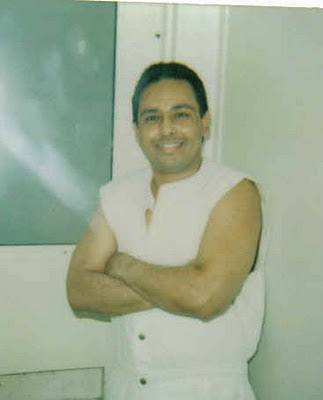 (The following post is courtesy of David Seth Michael's blog, called The Dream Antilles. Originally posted a year ago, in December, 2009, this story is by Luis Ramirez, who was executed in Texas on October 20, 2005. David Seth Michaels, an attorney in Columbia County, New York who has long worked to end the death penalty, got the story from a fellow death penalty opponent named Abe Bonowitz. As David wrote, "The story doesn't require any commentary, and I'm not going to give any. It's a gift to all of you for the holidays: Christmas, Chanukah, Kwanzaa, New Year's, Solstice, whatever holiday, if any, you may celebrate.")

I'm about the share with you a story whose telling is long past due. It's a familiar story to most of you reading this from death row. And now it's one that all of you in "free world " may benefit from. This is the story of my first day on the row.

I came here in May of 1999. The exact date is something that I can't recall. I do remember arriving in the afternoon. I was placed in a cell on H-20 wing over at the Ellis Unit in Huntsville, TX. A tsunami of emotions and thoughts were going through my mind at the time. I remember the only things in the cell were a mattress, pillow, a couple of sheets, a pillow case, a roll of toilet paper, and a blanket. I remember sitting there, utterly lost.

The first person I met there was Napolean Beasley. Back then, death row prisoners still worked. His job at the time was to clean up the wing and help serve during meal times. He was walking around sweeping the pod in these ridiculous looking rubber boots. He came up to the bars on my cell and asked me if I was new. I told him that I had just arrived on death row. He asked what my name is. I told him, not seeing any harm in it. He then stepped back where he could see all three tiers. He hollered at everyone, "There's a new man here. He just drove up. His name is Luis Ramirez." When he did that, I didn't know what to make of it at first. I thought I had made some kind of mistake. You see, like most of you, I was of the impression that everyone on death row was evil. I thought I would find hundreds of "Hannibal Lecters" in here. And now, they all knew my name. I thought "Oh well," that's strike one. I was sure that they would soon begin harassing me. This is what happens in the movies after all.

Well, that's not what happened. After supper was served, Napolean was once again sweeping the floors. As he passed my cell, he swept a brown paper bag into it. I asked him "What's this?" He said for me to look inside and continued on his way. Man, I didn't know what to expect. I was certain it was something bad. Curiosity did get the best of me though. I carefully opened the bag. What I found was the last thing I ever expected to find on death row, and everything I needed. The bag contained some stamps, envelopes, notepad, pen, soap, shampoo, toothpaste, tooth brush, a pastry, a soda, and a couple of Ramen noodles. I remember asking Napolean where this came from.

He told me that everyone had pitched in. That they knew that I didn't have anything and that it may be a while before I could get them. I asked him to find out who had contributed. I wanted to pay them back. He said, "It's not like that. Just remember the next time you see someone come here like you. You pitch in something."

I sat there on my bunk with my brown paper bag of goodies, and thought about what had just happened to me. The last things I expected to find on death row was kindness and generosity. They knew what I needed and they took it upon themselves to meet those needs. They did this without any expectation of reimbursement or compensation. They did this for a stranger, not a known friend. I don't know what they felt when they committed this act of incredible kindness. I only know that like them, twelve "good people" had deemed me beyond redemption. The only remedy that these "good people" could offer us is death. Somehow what these "good people" saw and what I was seeing didn't add up. How could these men, who just showed me so much humanity, be considered the "worst of the worst?"

Ever since Napolean was executed, for a crime he committed as a teen, I've wanted to share this story with his family. I would like for them to know that their son was a good man. One who I will never forget. I want for them to know how sorry I am that we as a society failed them and him. I still find it ridiculous that we as a people feel that we cannot teach or love our young properly. I'm appalled at the idea that a teen is beyond redemption, that the only solution that we can offer is death. It's tragic that this is being pointed out to the "good people" by one of the "worst of the worst". God help us all.

What's in the brown paper bag? I found caring, kindness, love, humanity, and compassion of a scale that I've never seen the "good people" in the free world show towards one another.
Posted by Claudia R at Thursday, December 23, 2010