Andrew Cuomo Your Father is Mario Cuomo NOT Ronald Reagan! 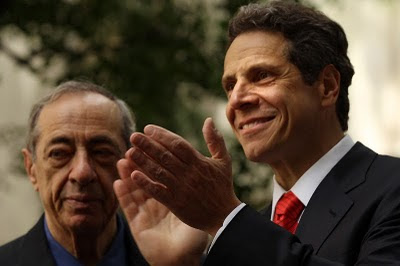 I left the New York State capitol yesterday, where demonstrators were streaming into the building to protest Andrew Cuomo’s state budget. The budget gives tax breaks to millionaires in a state loaded with them while making devastating cuts to education in the poorest school districts. The demonstrators planned on spending the night at the capitol, inspired by the example of protesters against Republican Governor Scott Walker.

Did someone really say that Andrew was not only a Democrat, but Mario Cuomo’s son?

In 1984, Mario Cuomo thrilled Democrats across the nation with a visionary speech that denounced President Reagan’s portrait of America as a “shining city on a hill.” Mario Cuomo told Reagan, “Mr. President you ought to know that this nation is more a ‘Tale of Two Cities’ than it is just a ‘Shining City on a Hill.’”

What more appropriate description could there be of New York, which boasts the biggest gap between the rich and poor of any state in the nation, than a tale of two cities.
Mario Cuomo went on to use words that could be a direct indictment of his son’s budget. He said Reagan’s philosophy was to

“Make the rich richer, and what falls from the table will be enough for the middle class and those who are trying desperately to work their way into the middle class.” Instead, he urged the President to listen to Americans like “a woman who had been denied the help she needed to feed her children because you said you needed the money for a tax break for a millionaire.”

Mario Cuomo laid out the task for Democrats in the 1984 election: “We must convince them that we don’t have to settle for two cities, that we can have one city, indivisible, shining for all of its people.” And he asserted, “We speak for young people demanding an education and a future.”

While New York faces a budget crisis — and budget cuts are inevitable — Andrew Cuomo has chosen to emulate Reagan rather than his father. As the New York Times wrote in a March 20th editorial, “Just extending the surcharge on New York’s highest earners through 2012 would add an estimated $1.2 billion in revenue to the upcoming budget and $4 billion the following fiscal year. Without that surcharge and other targeted tax increases, Mr. Cuomo’s proposed cuts in education and other vital services will inevitably be deeper and more painful than necessary, harming both individuals and the foundation for the state’s future economic growth.”

The choice is most stark when it comes to education. As the Times pointed out, “For instance, Mr. Cuomo wants to withhold a $1.2 billion payment due to poor school districts under a 2006 court order. If the Legislature agrees, it will be the second year in a row that the ordered payment is not made. And it will further widen an already unconscionably wide gap between rich and poor school districts.”

The editors at the Times highlighted the injustice of that gap in another editorial a few days later, in which they compared two school districts, echoing Mario Cuomo’s portrait of two cities. In wealthy Syosset, which offers almost 30 Advanced Placement courses to children who graduate to Ivy League schools, Cuomo proposed to cut $212 per student. In upstate Ilion, which has one AP class and where one-third of the students qualify for the school lunch program, Cuomo’s budget cut $688 per student.

The buzz around Albany is that this is all about Andrew Cuomo’s insatiable desire to be president based on a strategy of being a fiscal conservative and a social liberal. At the same time that Cuomo has insisted on giving tax breaks to the rich, he’s begun pressing the State Legislature to legalize gay marriage. His father’s moving address was based on unifying people, saying, “Remember that, unlike any other Party, we embrace men and women of every color, every creed, every orientation, every economic class.”

His son seems to have put his finger in his ears after “orientation.” But then, the wealthy Democratic donors who are spending millions of dollars to push Cuomo’s budget plan don’t hear that well either.

One courageous New York Senator is rejecting the calculus that civil rights will trump economic rights. Manhattan Senator Thomas Duane, an openly gay champion of marriage equality, will vote against the budget. But where are the rest of New York’s Democrats, who control the State Assembly and make up a 48% of the State Senate?

Only seven Democratic Assemblymembers had the guts to buck the Democratic Governor and vote against the budget bill that will lower tax rates for the rich. A handful of Democratic Senators will join them. The rest are captive of Albany’s craven “let’s make a deal” politics that seems to strip state legislators of the courage to do what is right.

Mario Cuomo seems to have lost one of his own family members along the way.

Bravo for this piece. Bravo.

I am profoundly disappointed and outraged by Andrew Cuomo's budget and his callous disregard for the plight of New York's working class poor and middle classes. It appears to me that he is a political animal who is all about ambition and what's politically advantageous for Andrew Cuomo and not good for the people of his state. He is a disgrace to his father's legacy and to the Democratic Party.

Richard
Your words really nail down the specifics of these discrepancies between father and son, between rhetoric and rights being violated. Not one single person of wealth from the banks and finance companies who caused the economic collapse of 2008 has been jailed, and even worse,now their crimes and havoc are being paid for by children, working poor and middle class. So here's another father-son scenario: A father loses the family home and car and wracks up debt due to irresponsible financing, then asks his young kids to go out and fix it. That's what New York is doing.
I also can't help notice that New York's governor is a bully - at the very moment in history when schools across the country are waging epic anti-bullying campaigns. He is a bully with his tactics, the video he sent to legislators, and his unwillingness to listen, change or be open.