Resurrecting Proust -- a new book that will help you tell YOUR story! 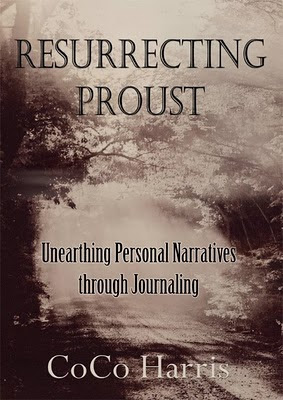 Note to Readers: I had the very great pleasure to meet writer CoCo Harris at a journal writing conference in Denver back in 2008. I've been waiting for her book, "Resurrecting Proust," ever since! CoCo -- a self-described "true believer in the power of expressive, creative writing" -- has compiled a fabulous set of journaling techniques and prompts that take you by the hand and lead you directly into personal storytelling and memoir. Thanks CoCo, for your terrific book!
PREFACE
By CoCo Harris

He didn’t invent it, but he owns it: the Proust Questionnaire. A questionnaire devised by Antoinette Faure, the daughter of the 19th century French president, was taken by Marcel Proust at the ages of 14 and 20. Although completed only twice, his name has since become associated with this set of 23 questions that was once the bourgeoisie parlor game of Paris.

At social gatherings in the late 1800s, the social and literary elite would answer this set of questions and share their responses in a game-like fashion. In an 1892 article, Proust published his answers as “Salon Confidences Written by Marcel,” in La Revue Illustrée XV and this Parisian Parlor game later became famously associated with his name after his death in 1922.

Now, in the 21st century, versions of the Proust Questionnaire have shown up in a wide array of magazines, newspapers, blogs, and even talk shows. This post-modern resurgence of related questionnaires has illustrated the desire of readers and writers alike to stop and take a quick look at who they are and form answers based on a set of specified questions.

Well over a century later, and long after the questionnaire became in vogue, a host of such quizzes have crept onto our computer screens in non-print versions by way of myriad web sites, social networking sites, and scores of emails; which, at best, only offer small morsels of insight into the psyche and soul of the queried; and at worst, provide an assortment of collected trivia.

Resurrecting Proust encourages much more than trivia in this next level of querying and contemplation. By providing a set of creative journaling techniques, along with stimulating prompts, this book requires those engaged in it to not only search for answers but to go further and consider the why, who, where, when, and most importantly, what we have become because of our thoughts and experiences.

Marcel Proust has long since been revered for his languid passages that evoke a connection between the act of reflection and understanding aspects of the self. Proust’s fiction and nonfiction writings are replete with contemplative introspections carrying the readers along emotional threads weaving a thick tapestry of interiority. His characteristic introspection embodies the type of writing Resurrecting Proust is aiming to evoke.

We are now more aware of the role of uncovering the emotional tone of our memories, both consciously and unconsciously. Our memories create our stories, which are the inner narratives that we tell ourselves over and over again, revising all along. Our stories are central to who we are, or who we think we are. Key to identity is the act of reflection.

Today, we are continuing to evolve even further into examining our psyches, attempting to understand who we are, and in this case, telling our stories. More than ever, we are reading, writing, and sharing our stories in various forms of memoir and literary biography. Resurrecting Proust allows us to push the boundaries of structure in our personal narratives. We are afforded an opportunity to take ourselves at face value without judgment and unearth our stories by way of the informal guise of journaling to produce memoir as art.

Furthermore, as we move forward with the old and new ways of creating narratives, a guiding template such as Resurrecting Proust allows us to move toward more robust and dynamic storytelling, while maintaining interior forms of expression. With the creative journal writing techniques described herein, we are writing Letters (sent and unsent), sculpting Poems, forming Lists, constructing Dialogues, traveling on Written Journeys, devising Portraits (of self and others), creating Artistic entries, taking on Altered Viewpoints, and mining our streams of consciousness with Freeversing.

Resurrecting Proust employs post-modern storytelling methods that push us even further into examining ourselves and shaping our stories. There are prompts within this text such as Living in You-topia; Words that Stick; Stupidity; On Death and Dying; Never!; The Name Game; Ego vs. Superego; It Was the Best of Time; and Time Capsule just to name a few, all of which foster meaningful memory mining, not unlike the famed questionnaire. However, these techniques, in conjunction with the array of prompts, attempt to influence sustainable story. Some examples of these stories are presented in the brief anthology of Part IV,3 The Techniques in Action.

Sure, we can continue to produce trivia that can be palpated in a game-like fashion, but Resurrecting Proust requires us to think, describe, relate, invent and examine who we are and to craft our personal narratives along the way. We are moved to go beyond the responses of trivia and actually create memoir-art.

Writer CoCo Harris, a native of Atlanta, attended Howard University as an undergraduate, majoring in electrical engineering. She did graduate studies at Howard in African Studies. She earned a Master of Fine Arts in Writing in Fiction from Spalding University in Louisville, Kentucky. "Resurrecting Proust" was published by Telling Our Stories Press. You can purchase Harris' book at Amazon.com or at the website for Resurrecting Proust, at http://www.resurrectingproust.com.

I love your blog and I follow it quite regualarly. But I have recently been diagnosed with macular degeneration, and sometimes I have difficulty reading the blue text against the white background since you changed the template. I like the bright colors, but there is not enough contrast between the blue text and the white page. Would you consider still using black print from time to time? Thank you for your consideration.

Dear Anonymous, my mom has macular degeneration and it makes reading so hard! I am going to the design feature right now to change the blue text back to black! Many thanks for writing to tell me this, and MUCH GOOD LUCK TO YOU with your eye situation! Best regards, Claudia Ricci

Thank you so much Claudia, this is so much easier to read!!

So glad! glad you wrote to tell me! be well! CR