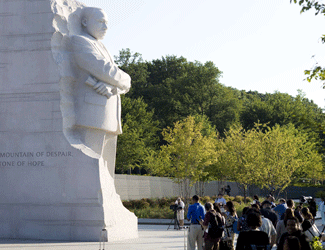 Funny how things work out sometimes. Because of the threat of Hurricane Irene, the national dedication of the new Martin Luther King, Jr. memorial in Washington, D.C. was indefinitely postponed.

But that didn't stop Dr. King's old fraternity, Alpha Phi Alpha, from going ahead with their private tribute on Friday. Alpha Phi Alpha is the nation's oldest Greek-letter fraternity for African Americans. Thousands of fraternity brothers, wearing black-and-gold, gathered and locked arms to sing their celebration of the new monument.

The irony is that because of the bad weather, Alpha Phi Alpha was the only group holding an official tribute to Dr. King's monument on Friday. But that makes a kind of cosmic sense, because Alpha Phi was a guiding force pushing for the monument. After Dr. King's assassination in 1968, the fraternity set up a foundation to help promote the idea that a monument should be built in his honor in Washington, D.C.

And what a monument 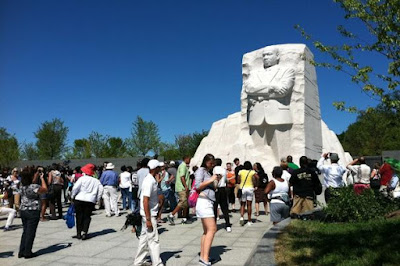 it is! A glorious and gigantic block of marble carrying a likeness of Dr. King now sits on the Tidal Basin along with the Jefferson Memorial and the memorial to FDR (another stunning monument!) Chiseled into the side of Dr. King's memorial are these words: "OUT OF THE MOUNTAIN OF DESPAIR, A STONE OF HOPE."
Posted by Claudia R at Saturday, August 27, 2011