Drama and Disaster -- How Do We React?

Note to readers: The following post appeared at about 11 a.m. on Sunday, August 28, when Hurricane Irene's full wrath had not been visited on upstate New York and New England. In the aftermath of the destruction, this post appears rather cavalier and insensitive, and for that I am deeply sorry. I would certainly not have written this post this way on Monday, August 29th. To see the devastation and destruction visited on so many communities is heartbreaking. The point I was trying to make here, however, is that it feels like we are forever landing in CNN's war room with Wolf Blitzer, witnessing another tragedy. To me, the worry and anxiety set up by what often feels like media frenzy and hype have itself damaging consequences for our collective psyche. In light of what's happened with Irene, difficult questions arise: how should we prepare for emergencies? How much preparation is enough? Probably everyone would agree that we should take every possible precaution; if even one life is saved by being prepared, then our efforts have paid off. But can we have preparation without hysteria? Should we be in the war room every day for each and every event? That to me seems like overkill. I suspect this subject, and its attendant controversy, will come up again. Meanwhile, my sincere prayers are with the victims of this weekend's tragic episode and all the people who continue to suffer. The devastating circumstances inflicted by Hurricane Irene certainly will not quickly go away. -- Claudia Ricci 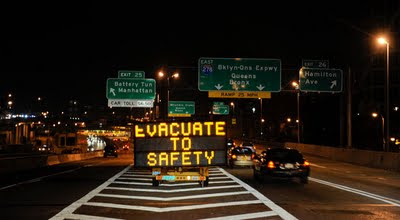 This piece also appears today on the Huffington Post.

Call me a skeptic, but is it possible that we've all gone over the top with our anxiety over Irene? I'm not saying we don't have a serious storm here. It's a tragedy that has already killed at least eight people. And I'm all for preparedness in the face of disaster, but for heaven's sake, the news and social media hurricane that have escorted Irene's arrival has set my anxiety into a tornado spin.

Do I have enough candles? Should I board the windows? Shall I fill all three bathtubs? Will we have enough food to eat?

One gas station in town here actually ran out of gas yesterday as panic-stricken people stockpiled for their home generators. When I heard that, I got this fluttery feeling in my stomach -- how quickly people react. And perhaps, over-react. What happens if and when there is a true national emergency?

More and more lately Americans seem poised for Armageddon. We all seem braced for the worst possible disaster imaginable. I suppose that's not surprising considering the shadows that have descended. Our world seems so full of danger and destruction and despair. There is terrorism and extremism everywhere. Car bombs are so common we hardly pay attention to them anymore. Economic disaster and political gridlock and dysfunction loom so large that they now seem to be seriously endangering our own democracy (i.e., consider the debt crisis debacle of a few weeks back.) Meanwhile, millions of regular Americans have lost their jobs and homes over the last few years, while more and more worry about the long-term erosion of the middle class and American dream.

With all this crazy scary news, is it any wonder that we are jumpy as electrons? We are a nation living in constant PTSD. And this week, we East Coasters have weathered an earthquake AND a hurricane. No wonder we're enduring what my son Noah is calling "Hurricane Hysteria."

It doesn't help of course that we are so finely and furiously wired up. Our social media keep us skittish. Incessant Twitter and Facebook feeds act like steady adrenaline pumps. And the regular media, as always, thrive on our insatiable hunger for drama. We slurp up reality TV. We sit glued to our screens for moment-by-moment updates on anything that constitutes reason for a Wolf Blitzer war room. We are, I'm afraid, addicted to disaster.

A few minutes ago, my son was reading the NY Times on-line, and he called my attention to a photo out of storm-torn Manhattan: a giant tree limb had crashed into an awning at First Ave. near 13th Street. Since my sister Holly lives at First and 14th, I got on the horn and phoned her.

Holly laughed. "I think the sun is coming out," she yawned. "I hate the sun." (My sister has never been a morning person.) She said she had pots and pans filled with water stored all over her apartment. And plenty of batteries.

Sure, it was raining hard, and the wind was blowing, but she was still waiting for whatever it was that was going to happen.

Meanwhile, she was going back to sleep.

Irene, you Drama Queen. You know we are suckers for pulse-popping reality shows. No wonder you took the stage, and the East Coast, by storm.

All of this has got me thinking: wouldn't it be fascinating if some social scientist types tried to measure how much psychological "damage" to the public psyche was caused by anxiety-provoking pre-publicity devoted to these events?

Of course, hindsight is twenty-twenty -- one can't be sure what's going to be a non-event and what's going to turn out to be a first-class tragedy. But it's interesting to think that these bad/sad/scary news stories give lots of people lots of anxiety and stress, both of which are bad for our health, both individual and collective (public health)!

Meanwhile, here is the view out my backyard. 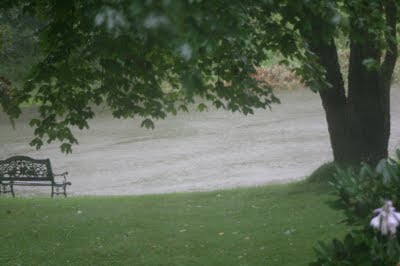 Yeah, it's raining hard, and the pond is filling up fast -- it's higher at this point in the year than it's ever been in 26 years of living in this old farmhouse. And sure, we will probably lose power today. But some people might say that was a good thing, because it would shut me up and get me off my computer and doing something useful.

Maybe we should all reach for the off switch more often. Maybe we would all do well to step back more frequently from the frenzy that is fed up by our computers, phones, televisions and radios and just stare out the window, and breathe.