"My Medical Miracle" Published on "This I Believe" 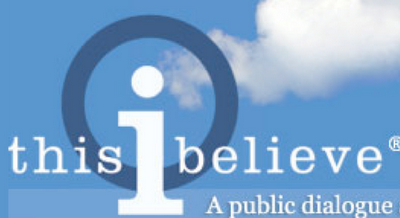 Note to readers: My world turned upside down on August 6, 2003 after a medical intuitive performed a long-distance reading on me. Last week, I received word that the story of that encounter would be published on This I Believe's on-line publication. This I Believe -- a project which has with Henry Holt & Co. published two books of essays -- calls itself "a public dialogue about belief -- one essay at a time." I am honored to have my essay on the site. I am also incredibly grateful to enjoy good health today.
By Claudia Ricci

I believe a miracle happened to me on August 6, 2003, and it turned my view of medicine, and the whole world, completely upside down.

Maybe you won’t believe me.

It was the second summer I had to face treatment for Hodgkin’s disease, a curable cancer. I felt as healthy as a racehorse that summer. I was jogging and sporting a wild mane of new curls.

Still, the CT scan at my regular check up showed an olive-sized spot in my chest. The oncologist insisted I needed a stem cell transplant, a procedure that brings you near death before it cures you, supposedly.

I demanded a second opinion.

And blow my mind she did.

August 6, 2003 was a hot day in L.A., where I was visiting my sister. I phoned the medical intuitive at precisely 7 a.m., as instructed. The intuitive – who diagnoses disease from a distance, on total strangers – was in Stowe, Vermont.

She had never met me. She didn’t know my last name. She knew only that I had suffered from cancer.

“Lie down,” she said. “Your limbs will get heavy. After 45 minutes the feeling will go away. Call me back.”
To read the full essay, go to This I Believe, a program based on the radio feature of the same name. Back in the 1950s, radio personality Edward R. Murrow challenged Americans to express their beliefs in 500 words or less. The program was resurrected by National Public Radio in 2005. Some of the "This I Believe" essays are now featured on Bob Edwards' satellite and public radio shows.
Posted by Claudia R at Saturday, August 06, 2011

You go girl!! It's about time they published this!