A Bounty of Song in Berkshire County

On Sunday afternoon, November 20, eighteen members of the Hevreh of Southern Berkshire community gathered in Great Barrington, Massachusetts to give a fabulous choral concert. The singing group, known as Berkshira, is directed by a first-class choral director named Arlene Symons, whose lifelong work has been singing, piano playing and choral direction. One of the choral concerts she directed several years ago -- which combined youngsters with seniors -- was featured in a documentary that earned an Oscar. 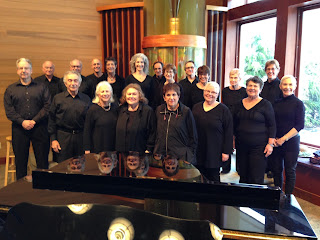 So here now Arlene has turned her energy to making a grand chorus out of amateur (reading music is NOT required) singers in Berkshire County.  The name Berkshira derives from the Hebrew word "shira," which translates as singing, or song. Arlene is all about song.

In some magical fashion, Arlene takes raw talent and enthusiasm, plus wonderful old time songs, and voila! She produces the kind of concert that earns standing ovations.

Our concert on Sunday -- which was held in spite of a blow out blizzard -- attracted a huge crowd, and was so successful that we are "booked" for another concert in May! (We will remind you then.)