This CNN commentator Would Make a Great President! 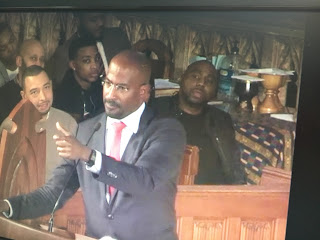 I happened to walk into my husband’s office yesterday.
He was watching a video featuring a speech that CNN commentator Van Jones gave at an African American church (St. Sabina’s) in Chicago last month. It was startling. It was stunning.

I was on my way to take a shower when I stopped and watched the whole speech. I was transfixed by Jones’ extraordinary presence, his passion and his brilliance. He is also very handsome and that helps.

And yes, he reminded me of Obama!

As a CNN commentator, he always appears with a stage full of others. His remarks have impressed me, but it wasn’t until today that I was totally wowed by his integrity, his command of the political situation in this torn-up country, and his endless eloquence.

Jones was introduced by fellow CNN commentator David Axelrod, who helped engineer President Obama’s presidential campaign. (Axelrod and I were both Chicago reporters for competitive newspapers way back in the early 1980s, but I’m sure he wouldn’t remember me.)

He tells very touching stories about marching with coal miners. Being from the San Francisco Bay Area, he was trying to stoke up marching fervor among the miners. He launched into a chant and was mortified when none of the miners followed suit.

And then a woman came up to him and touched his arm.

Meaning that they had severely compromised lung ailments associated with years of inhaling coal dust in mile-deep mines. Jones was in tears.

As I watched, I found myself flying way back to 1992, to the New Hampshire primary, when there were a huge number of candidates fighting for the Democratic primary. I had virtually no interest in politics at the time. I sat down with my husband to watch a debate with the candidates. Within 30 seconds, I pointed to Bill Clinton.

“He’s going to win,” I announced matter-of-factly. He was so incredibly handsome and intelligent and he spoke with such style and pizzazz. I guess he was “telegenic” in a way that, sadly, his wife could never be.

Please. Take a half hour and watch this amazing video. See if you don’t agree that Van Jones would be an extaordinary candidate for President! (As far as I know he has no plans to seek elected office.)

Then send the video to all your email contacts. Do Facebook/LinkedIn/Twitter. Talk to your friends and your neighbors and even the people who voted for you-know-who.

Jones makes a compelling case for those white factory workers who have been out of a job for four or more years. He forgives them for voting Republican. He carries you into the workers’ hearts and minds and lives. I found myself for the first time since the Election feeling some compassion for the voters on the other side.

Perhaps Van Jones can do the Bernie Sanders burn thing only better (he talks about Sanders in his speech.)

My favorite line of Jones: he was talking about you-know-who — the one who Twitters all night long and plays at being President during the week and then plays (for real) golf in Florida at his mansion each and every weekend.

"He’s not a liberal,” Jones said. “He’s not a conservative. He’s just a jackass.” How sweet it is to hear somebody telling it like it is with such style and grace.
Posted by Claudia R at Thursday, March 16, 2017