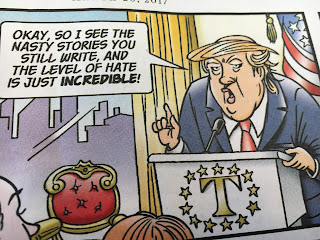 Check out the Dunesbury cartoon on the cover of The Nation's March 20th special issue, which focuses on "Media in the Trump Era." If you aren't familiar with the magazine, here you go.  According to Wikipedia,

"The Nation is the oldest continuously published weekly magazine in the United States, and the most widely read weekly journal of liberal/progressive political and cultural news, opinion, and analysis. It was founded on July 6, 1865, as a successor to William Lloyd Garrison's The Liberator,[2] with the stated mission to "make an earnest effort to bring to the discussion of political and social questions a really critical spirit, and to wage war upon the vices of violence, exaggeration, and misrepresentation by which so much of the political writing of the day is marred." It is published by The Nation Company, L.P., at 33 Irving Place, New York City.[4] It is associated with The Nation Institute.

The Nation has bureaus in Washington, D.C., London and South Africa, with departments covering architecture, art, corporations, defense, environment, films, legal affairs, music, peace and disarmament, poetry, and the United Nations. Circulation peaked at 187,000 in 2006 but by 2010 had dropped to 145,000 in print, though digital subscriptions had risen to over 15,000."

I include the first and third frames of the cover cartoon. I offer the same advice I usually offer: show your support for progressive (anti-White House) politics and the media in general by subscribing to The Nation. And then buy a subscription for a friend! 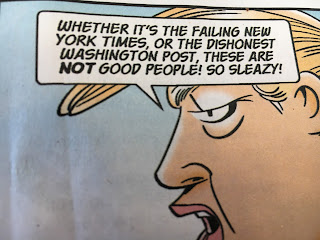 On another note, MyStoryLives celebrates its 1000th post this week. Thanks to all those folks who have published here, and to all of the blog's readers as well.
Posted by Claudia R at Saturday, March 18, 2017