WAKING UP TO WHAT'S IMPORTANT

Before she woke, about 4:30 a.m., Leah’s dreams carried her someplace exciting like Italy where she was chiseling limestone and then entering the sculpture into an important art show. She was working alongside other artists including her dear cousin Pat Rotondo, an exquisite painter she respects so much.
Leah loves those art dreams, when absolutely everything seems possible.
About 5:25 a.m., Leah got out of bed and made a protein shake and coffee. Then she sat in meditation. She sat in the front yard under the new robin’s nest that rests in the V of the pergola rafters.
At some point she took a photo of the irises that once grew in Grandpa Angelo Ricci's yard. Those irises were magnificent and these in her yard are going to be just as magnificent when they bloom. Fortunately Leah's sister Karen was wise enough to take some of Grandpa's irises years back. Karen carried them to her home when she moved across country to California 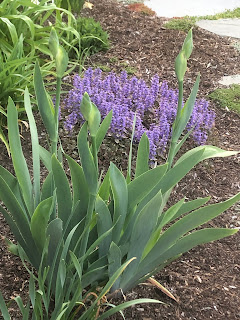 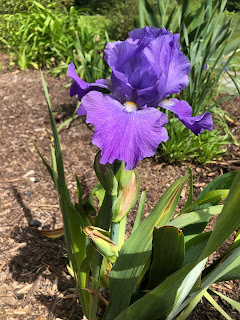 And then she moved them back when she returned to build a home in Massachusetts. That's when Leah got smart and took some to her own home.
Now she is sitting in her study staring outside at the limestone boulders beside the forest. They rest there with such equanimity.
That word, equanimity, is one she wants to chew up and swallow. She wants her mood swings of late to come to rest like a hammock strung between two trees. Why is it so easy for some people, like her husband, just to live day after day without so much emotional turmoil?
*********
Leah keeps pausing, because she can’t stop thinking about her dear friend David who passed the other day. He was a fantastic writer. His books sold well, and were restocked in many stores over and over again. Curiously, though, when she thinks about his success, it isn’t the fact that he sold a lot of books. It’s the fact that he lived a joyful life, in spite of the crippling effects of his polio. David suffered terrible pain year after year because of the polio, and used crutches and walkers and wheelchairs to get around. But he never let on to friends that he was in pain and he never let his disability get in the way of enjoying his life. With the help of his incredibly loving and energetic wife, Sharon Flitterman-King, David lived a full and robust life, traveling and enjoying all kinds of outings throughout the years.
On the morning David died, at just about the time he expired, Leah saw a bird the color of a ripe blueberry dance across the meadow and go sweeping up into a pine tree. She has never actually seen a bluebird in the yard before. What a miracle this glorious bird is. And what a blessing David’s life has been.
When Leah focuses on what is important in life, she always comes back to the same thing: she wants to live in peace and love, feeling joyful and alive. She wants to share that joy and love as often as she can and bring it to other people's attention in her writing and her art. 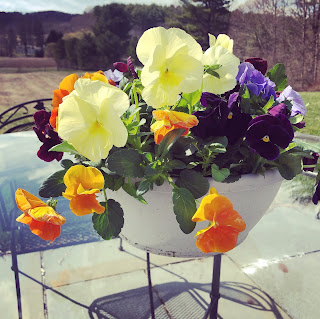 Yesterday, Leah wrote a poem called “Awakening.” And today, after she finished meditating, she wrote a second poem called “Stay the Moment.”
She is comforted by both these poems.
This being the week of Memorial Day, she will spend time thinking about loved one who have passed: Mom, Dad, David. She will go slowly through the day, planting flowers and watching hummingbirds come to the new feeder. She will watch other birds come to the wooden birdbox her husband attached to a post at the edge of the meadow. It is a bluebird box, but it is attracting other birds instead.
No matter. She and her husband will enjoy whatever bird decides to settle in.
Posted by Claudia R at Tuesday, May 26, 2020