Miracles in the Meadow

It happened a few weeks ago, after dinner, as we sat gazing out at the meadow. I had seen a small deer grazing now and then, but that night, the small deer appeared with a very tiny fawn.

I had also seen a coyote that morning, making circles in the tall green grasses. 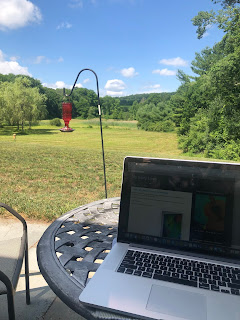 Twilight was descending when the fawn and the mom strolled into our view. Suddenly our dog Poco started barking and spooked the mom. She fled to the back of the field and bounded over the fence, leaving her baby behind. Back and forth the fawn went trying to find a place to get through the fence to be with mom. I asked Rich, "Should we go over there and lift her across the fence?" We decided against it. Soon enough it appeared that they had found each other so Rich and I got up and went into the house.

No sooner were we starting to close the door when we heard a gut wrenching bleating and yelping All I could think of was the coyote and the baby fawn!

We flew out the door and there in the distance on the right of the meadow was the coyote. The little fawn was on the left and the mother was nowhere to be seen.

I turned primitive. Without thinking, I went running toward the meadow bellowing, "GET OUT OF THERE DON'T YOU DARE TOUCH THAT FAWN GET OUT OF HERE!" I must have scared the coyote because he took off. I stood there amazed. 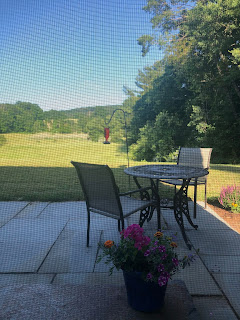 As twilight deepened, the mother and baby strolled up the field toward our lawn. I stood at the edge of the meadow and I could see the mother staring right at me. The pair stood there for a long while with me saying "Everything is ok now, you are safe. I won't hurt you and neither will the coyote."

It felt like a long time that we were gazing at each other. Slowly the mother and baby turned and disappeared into the wetland.

And I went into the house, my heart beating, and full of love and gratitude.

Mary says, "The Divine is speaking to you personally."

Maybe. Today when the fox appeared, a beautiful golden brown, it crossed the meadow before it slowly came towards me. But it didn't stop before it disappeared into the  forest on the right.

I am so grateful for these miracles, the hummingbird by my shoulder and the deer and the fox appearing in the meadow.