I open my mouth. Nothing. My mind is a blank too. But somehow I know I have to write this chapter. I have to write about what happened on the road to getting healed.
It's been 8 years almost to the day since that horrific hospital stay. It was only three days long because I couldn't stomach another minute. 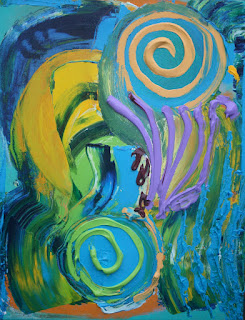 I wasn't planning to write about it. Sitting here I'm still not sure I can.
But now a very dear friend is a patient in one of these wards, and there's no end in sight for her. I was asked to bring her some clothes and as I drove to Hudson, N.Y. to the hospital, it occurred to me that if this is indeed a healing tale I'm writing, then by rights, I have to recall it all, I need to talk about where I was before I finally saw the light.
No one with any sense would willingly land in a hospital psych ward, if they knew what they were getting into. You go to a psych ward because a) you're regarded as a danger to yourself or B) you've tried everything else and nothing has worked and you think maybe this will help.
But your terror begins almost the very minute the intake starts. That's when they sit you down and take away your phone, your keys, your wallet, and anything else that reminds you of who you are.
You say goodbye to the husband who's brought you and you're led back to the ward. You have a room with two twin beds. Sheets. A blanket. Nothing on the bare scuffed walls.
You have a hazy memory of the other people.  You weren't like them. Were you? They were the ones who were really crazy. Not like you, a well educated woman suffering from a serious depression. These other people were angry. Or silent. Or incoherent. Or insulting. Some of them yelled profanities.
You were on the phone almost immediately begging: "please please honey I made a mistake please get me out of here." But they had you for the next 72 hours, so settle in.
I'm fighting myself here. I'm trying to tell you how awful it was but I really can't because I've done such a good job burying it in the deepest reaches of my psyche.
How about breakfast? Watery coffee. White toast. Cold scrambled eggs but I am not hungry anyway.
And then the group meetings. Sitting in a circle for what? To share your misery with others who are even more miserable than you are?
I don't remember the doctor. The nurses. The aides. The social worker.
I remember being deeply afraid that somehow I would never get free. I called my husband so many times. And he visited me every day. Nobody else had visitors.
Maybe I should stop here. Maybe this is enough.
I am today a very healthy person. Yes I have my mood swings, but more often than not, I'm in a good state of mind. But I still cringe when I think about this part of my past.
The real problem? I had a string of horrible therapists. And I wasn't on the right medicine.
It wasn't until December 2012, six months after the hospital stay, that a talented psychiatrist in New York City suggested another antidepressant.
And it wasn't until February 2013 that a miracle was bestowed on me and I met Mary Marino, who has a PhD in Jungian psychology.
The woman who recommended her to me said of her, "She saved my life."
And yes.
She saved mine too.
Posted by Claudia R at Wednesday, July 22, 2020