Resurrecting Red Roses -- Another set of "Flip the Script" stories!! 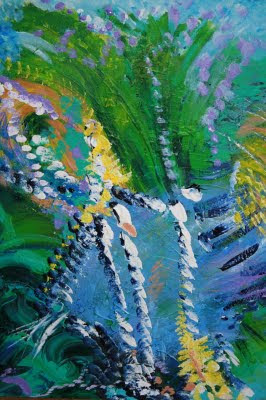 Note to readers: Students in both my spring semester classes at the University at Albany, SUNY, are writing stories for an exercise called "Flip the Script." The exercise involves writing a painful life story, and then "flipping the script" -- taking a new and more redemptive approach or point of view in the narrative. In the story that follows, sophomore Jamie Gibbons, who is majoring in English and minoring in psychology, writes very poignantly about losing her grandfather. Part two of her story, "Red Roses,"
will follow shortly.
By Jamie Gibbons

He was never much for talking. A story to him had to be only five minutes long. If you could not tell it all to him in then, he did not see the point. The most talking he did was with jokes. If you do not have a thick skin, or cannot take sarcasm, then talking to him probably was not the best move. If she said something that was noticeably unintelligent, she could always count on him to point it out. He never really showed emotion either. You could never tell how he was feeling. He never said I love you to her, but when he sent her roses on her eighteenth birthday, she knew what he wanted to say. She just wished she could have actually heard the words.

He had gone into the hospital around Christmas time. Some major surgery needed to be done to his heart, if he wanted to stand a chance at all. After the first one, they had to leave him in a coma, for the wounds to heal themselves. At one point, while she was alone in the room with him, Megan told him that she wasn’t done with him yet, and that he needed to fight just a little bit longer. When he woke up, she thought that had worked. But days, then months went by, and he still wasn’t going home.

Megan pulled into the driveway that summer afternoon, after a long, hot day of school. Her senior year was ending so even though she usually didn’t see the point in going this time of year still, she kind of liked to be able to see her friends for a few last moments there. Megan`s dad was in the car business. He hardly ever had days off, unless they were a specific day that the dealership gave to all of the managers for their work. But, even on those days, he usually still had to go in. So when she saw his car in the driveway that afternoon, she knew something was wrong. “He`s dead.” is what her gut instantly said. Her mind was racing. “O.K., you need to calm down. That can`t be it. Maybe he just needed the day off.” Megan kept saying to herself. She wanted to believe it more than anything, but couldn’t make her body get out of the car, and walk inside to find the answer.

She walked into the house slowly. He parents were sitting there watching television, and her dad was soaking wet from just getting out of the pool. Everything looked normal. Maybe it was all just a weird mind game. She breathed a sigh of relief and said hello to her parents. They both turned to her and she saw the reds of their eyes masked behind their fake smiles. She asked what was wrong, and when her mom opened her mouth, she could already sense the words that were coming. “Grandpa died today honey.”

Megan`s books hit the floor as she ran upstairs to her room. How could this happen? The one person that she could always count on, one of the ones she loved the most, gone forever at one of the most important times in her life. There is no way she could have done something to God so horrible that she deserved this kind of karma. Her mom came knocking at the door to come and sit with her. She didn’t want to let her in but she knew she had to. All her mother could say was it will be alright, but even she knew that was a lie.

Days of just laying in bed followed that moment. How could the world keep moving on when such a giant part of it was missing? Finally it was time to face the music. The calling hours were the worst. People you don’t even know trying to hug you and tell you how sorry they are for your loss. All Megan could think as she listened to them was that they have no idea how she feels. Has their entire world ever been torn away from them in an instant? She didn’t think so. At the funeral she had to listen to people tell all the funny stories about him, to try to make the outsiders feel connected. But she knew it was all an act. The best parts of him were the ones that couldn’t be described in a story. Just the way he was, made him the perfect man.

Graduation came and went, so did the senior prom. None of it was as exciting for Megan because she knew that the one person that should be there, wasn’t. She sometimes still cries at night when she thinks about him, or talks to him to tell her about her day. But, every time she looks at the dried out, dead roses that he gave her, hanging from her wall, she feels him there. She feels his connection and knows that no matter what, he will always he next to her. Those dead flowers are the life of him still inside of her.