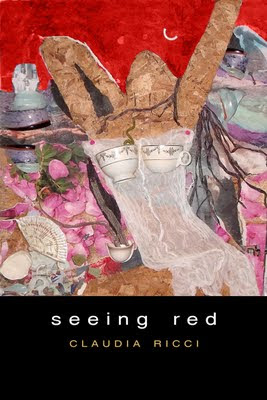 In the novel Seeing Red by Claudia Ricci, readers follow Ronda on her adventures of love, passion and self-discovery. Sounds hokey and unoriginal on the surface, doesn’t it? But let me just say that Ronda has issues, and they are very interesting issues. Instead of pursuing a career in dance at the age of 19, Ronda got caught up in a relationship with her college professor, got married, and raised two boys.

Now 18 years later, Ronda is newly divorced and dealing with her sons’ transition into adulthood. Life is forcing her to examine her marriage, her unfaithfulness, and her changing relationship with her children.

At the same time she must come to terms with these changes and her own infidelity, Ronda finds a renewed passion for dance and gives herself over to the study of flamenco. However, her life takes a twist when her lover, Jesus, disappears in Spain.

With a book as artfully written as Seeing Red, it only takes a few pages to become immersed in Ronda’s world. For a time you won’t even know you’re reading; you’ll just feel like you’re there.

Emily Suess is a freelance writer based in Indianapolis, Indiana. This piece appeared first on her blog, Suess' Pieces.
Posted by Claudia R at Saturday, July 23, 2011