In my lifetime, no one has ever said to me, "You're cured."

From what they tell me, the experimental set of operations performed on me when I was a small child was worth a six-part series on Nova.

After literally slicing me open — front, back and sides -- the gutsy surgeon, Dr. Moses Swick, actually had to take parts of the renal system out of my body in sequence and lay them, still attached, on the table alongside me, as he worked to create detours and bypasses around the obstructions. This was surgery as creative art, more than it was conventional science. Had he planned all the steps beforehand? Or did he figure it out on the fly? Another question that will never be answered. And doesn’t matter.

Because, in the end, it worked. Against all the terrifying odds. I survived. I was nearly three when the process was complete. For the first time, I had viable kidneys, bladder and the tubes to link them—the plumbing my life depended upon started to work. It all amounted to the world’s first successful surgery on blocked ureters. But it would be months before most of those around me could stop crossing their fingers and breathe. As with other medical challenges I’ve faced, there has never been closure; never a guarantee that the problem was fixed. Or resolved. Or eliminated.

I’ve always been left to ponder questions that I knew no specialist would dare answer: Would I be normal? What kind of normal? Would the ureter grafts hold and would my body accept them? Did my kidneys, permanently damaged from birth, still have enough left to work? And did I? We’re each a little bit different physically. But my case seemed to be a quantum leap. There were no case histories, nor clinical studies to look to. I was the clinical study.

Much of it was “seat of the pants” medicine—trying to save a life anyway one could. And not so different from how they’re trying to save me now. It meant the doctors were making up day-to-day solutions as they went along. The surgeon, expressing less than sublime confidence after the fact, proposed I be confined to a wheel chair. For life. By some unknown miracle, that never happened.

I was too young to know about this in real time. The one memory from my infancy was a recurring nightmare in those first years: I was being wheeled on a gurney into a shadowy, darkened room. It seemed to have shelves, floor to ceiling, lined with empty Coca Cola bottles. And then the dream’s end always came abruptly—a heavy black rubber mask was pulled down over my nose and mouth. That’s all I have from the life-defying trips to the operating room.

But by age six or seven, I knew a little. It all somehow made me “special”—what more could any kid want? I was alive and felt okay. (Kidney disease is insidious because it rarely offers a warning until it is too late.) The condition could be lethal, but was without obvious symptoms. Yet it was the condition that defined me.

Dr. Swick became fast friends with my parents and remained so for the rest of their lives. There were never any wheelchairs, but many snap examinations. It was I who always answered the doorbell. The doctor would occasionally come to our home for dinner, bounding into the foyer and reaching out to pinch random parts of me—seeking signs of edema (excess fluid that belied declining kidney function). Miraculously, he never found any.

Ultimately Moses Swick was remembered more for his work in creating the first safe, effective systems for kidney and bladder radiology, using chemical contrast. But in the late 1940s, his ingenious ideas for the first bilateral nephrostomy were news in the medical community. Swick approached my parents and convinced them to bring me to a subcommittee meeting of the American Medical Association in Chicago. It was a dramatic way to show off the procedure and what it had done to the first patient. It turned me into the ultimate “exhibit.”

Eventually, my case and care were handed over from the surgeon to Dr. Ira Greifer, the reigning Chief of Pediatric Nephrology at the National Kidney Foundation—a major player at Albert Einstein Medical College in New York. 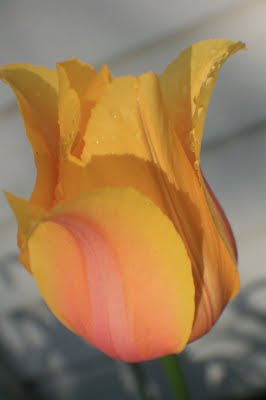 It was a relationship that lasted into my 20s and started a run of prominent kidney specialists who have watched over me through the decades.

From almost the beginning, it was apparent that the medical community was invested in keeping me going with cutting-edge care for as long as possible. None would dare say how long that could be.

And today, they are still not saying.

Sandy Prisant lives in Florida with his wife Susan. In March, he embarked on an incredible writing project, one that he suggested might be his last. Part One appeared March 13, 2011. Part Two appeared March 16, 2011, Part Three appeared on March 27th and Part Four appeared here May 1st, and Part Five ran on May 5th.

You confide in us, the invisible readers of your story, that no one has ever told you, “You’re cured.” As I’ve said before, “you were the miracle-child and now, you’re a marathon survivor against all odds in need of a heart and kidney transplant. It’s your time again to confront death, as you did in the beginning.” Looking from the outside into your personal universe, it seems you’ve been extraordinarily fortunate to have triumphed over death so many times. Gifted, creative, and innovative surgeons have performed feats of magic, blessing you with life for decades. And yet, you were never cured. And I feel compelled to ask why. Why you? Why did you and your family have to suffer? What is the meaning of such incomprehensible suffering? I do not know you, and yet, I do. From a distance, I see you as a righteous and decent man. Like Job, you did nothing to warrant such suffering. You’re a fellow human being born with certain life-threatening medical problems. So it goes.
But where do you go from here? And what can I and other readers do to help you on your personal journey?
You must face these challenges, as you’ve done in the past, for you’re at the crossroads of your life. And historically, you’ve proven yourself to be a courageous man. Thus, I believe in you. You’re a source of inspiration to me and, I imagine, to others.
This is your existential struggle but I will share my thoughts, emotions, dreams, and hopes with you. Although you say this writing project may be your last, I suggest we don’t know. It’s too soon to say. You need both a heart and kidney transplant. I don’t know what will happen. Yet you’ve moved me and out there-in the benevolent universe, others will read your words and will be moved too. We need you right here-with us-writing words that inspire and motivate and help us transcend our mundane lives. So keep fighting. And tonight, listen to the oceanic flow of the heavens. I’m sending you a silent prayer, waves of health and joy. It’s for you, Sandy. Just for you.