Dear Sandy, Here's a Story of Another Man's Healing Miracle, May It Inspire You!!

Note to Readers: I wasn't planning to post this letter. But it is such a remarkable story, I just had to! I chose to use this image of the Omega Nebula because when I look into the night sky and see the endless stars, I am always astonished at the power of the universe. This nebula measures "several light years across." Incredible. CR 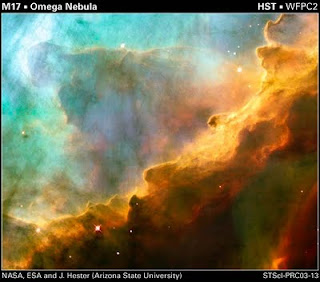 Throughout my life, I’ve had this persistent need to understand why. This relentless need has driven me to develop my scientific mind, dominated by my left hemisphere. But logical thinking did not empower me to explore the really big questions of life. What is the meaning of my life? What is my purpose? Why am I here? Is there a G-d? If G-d exists, what is His nature? Both good and evil seem to exist? Why? Why does a loving G-d permit evil? Is there a loving G-d? Why do good people suffer? Is there life after death?

The universe with all its laws and complexities seems, at times, to be a splendid design created by the Great Designer with intention and inevitability. At other times, it seems to be a whirling, swirling mass of chaos. In my darkest moments, I wonder if the universe is governed by chance and nothing else. What is the truth? For me, the truth lies in my poetic mind, dominated by my right hemisphere.

And when I immerse myself in imagination, an ocean of magnificent waves of illumination, I become connected to a beautiful Source of love and joy and creativity. Thirteen years ago, I embarked on an exciting and life-changing journey. I began my second marriage with a memorable honeymoon in Puerto Rico. We went for long, romantic walks on the beach, inhaled the tropical ambiance, and embraced beneath the sultry sun. I felt strong and healthy and happier than I had been in years. When we returned to Brooklyn, I had a routine appointment with my doctor. He told me he had some bad news. I had a fatal disease.

This esoteric illness was progressive. Over the next few years or sooner, I would become very ill and die a painful death. There were some treatments. But none were effective. And if I underwent these treatments, most likely I would suffer a lot. I wanted to ask him, what do I do? I said nothing. I went home to my bride and waited to die. A few years later, I took a leave of absence from work and began the daily treatments. These treatments were brutal. I became the living dead isolated from the outside world and alienated from my joyous self.

I thought I would die from the treatments. I didn’t. But something else happened. After several months of Hell, I was cured! Cured? I didn’t believe it. My primary care physician didn’t believe it. Yet the specialist confirmed that I was cured. Years have passed. I’ve been tested and retested many times. Miraculously, I’m cured. I’m a survivor. Why me? Why me and not them? I’ve tried to make sense of this. I’ve suffered from survivor’s guilt at times. Why? Do I deserve to live? Did the others deserve to die? Is it simply a matter of chance, the roll of the dice? Like you, Sandy, I’ve learned to cherish the moment. I try to live in it as often as possible. Sometimes I get sidetracked by future goals or heartrending memories. But I keep trying. And I write! I love to write. Writing is my joy and my salvation. It’s my lifesaver!