"The Journey We Take Alone" Part 9 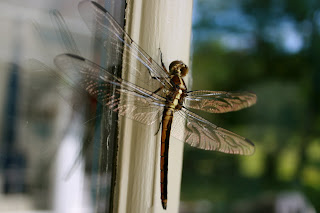 NOTE TO READERS: Writer Sandy Prisant had sent me Part Nine in his series and it was scheduled to run. But then on Saturday he got one of the worst phone calls imaginable. He quickly wrote a substitute piece and here it is. Life is as fragile as a dragonfly's wings. We all know this. Why is it so hard to accept it? Why is it so difficult to understand?

And then today, this happens:

What?? This is my brother’s closest friend and business colleague. They’ve been glued to each other for two decades. Mike runs a major health company. He’s in his 50s and in good health himself---still occasionally playing ice hockey.

Also a serious bicycle rider. Apparently, this morning in Norway, up near the Arctic Circle, Mike was on a long, slow touring ride along a highway. One minute he’s fine. The next minute a car runs him over.

That’s it. Mike’s dead. Not critical. Not waiting for a transplant. Not scheduling a biopsy. Mike is just... dead.

For my brother, for Mike’s multiple siblings back in Minnesota, for all those who rely on him, for that girl who wants to marry him, for the board of his company, today is an unalloyed tragedy.

But for the rest of us there is also a lot to think about.

I’m pondering many things: Am I supposed to feel lucky? Or is that distasteful? Why Mike and not me? This has been happening to me for years. Perfectly healthy people just keep on dying and I’m still here, fighting to survive. I’ve outlived some of my doctors. I’ve already lived longer than my father did.

How can we make sense of any of this? Those who keep going up against the odds -- and winning -- wonder at moments like this: what is protecting me? Or, am I here for a reason? Do I have tasks that I must finish before the end?

Ah, but those instinctive thoughts come from the desire for an orderly, coherent universe. And today, that’s not how the world feels.

Because we humans can adapt to most things -- even dreadful ones-- it’s instinctive for most of us to settle into an environment by habit. Even as things are taken out of our lives, the new normal can become somehow comfortable or acceptable, because it’s our own little world with a routine we know intimately.

That strange feeling is not really comfort in uncomfortable situations. It’s complacency. And complacency is the enemy of our mortality.

Maybe what’s most clear today is that this is how life really works. All the comforting suggestions, ironically saved for the seriously ill, are the best antidote for complacency—for all of us. Live in the moment. Make every day count. Focus on the present, rather than the past or future.

And try damn hard to do what you really want to do. That was exactly what Mike was doing on his bike, near the Arctic Circle, on his last day. That day we lost him.

WRITER SANDY PRISANT, A FORMER MANAGEMENT CONSULTANT WHO LIVED AND WORKED ALL OVER THE WORLD, NOW MAKES HIS HOME IN FLORIDA WITH HIS WIFE, SUSAN. PRISANT, WHO HAS HAD A SERIOUS KIDNEY DISEASE ALL OF HIS LIFE, IS NOW WAITING FOR A HEART AND A KIDNEY TRANSPLANT. PART EIGHT IN HIS SERIES, "THE JOURNEY WE TAKE ALONE," CONTAINS LINKS TO ALL PREVIOUS POSTS IN THE STORY.
Posted by Claudia R at Tuesday, June 21, 2011

Throughout my life, I’ve had this persistent need to understand why. This relentless need has driven me to develop my scientific mind, dominated by my left hemisphere. But logical thinking did not empower me to explore the really big questions of life. What is the meaning of my life? What is my purpose? Why am I here? Is there a G-d? If G-d exists, what is His nature? Both good and evil seem to exist? Why? Why does a loving G-d permit evil? Is there a loving G-d? Why do good people suffer? Is there life after death? The universe with all its laws and complexities seems, at times, to be a splendid design created by the Great Designer with intention and inevitability. At other times, it seems to be a whirling, swirling mass of chaos. In my darkest moments, I wonder if the universe is governed by chance and nothing else. What is the truth?
For me, the truth lies in my poetic mind, dominated by my right hemisphere. And when I immerse myself in imagination, an ocean of magnificent waves of illumination, I become connected to a beautiful Source of love and joy and creativity.
Thirteen years ago, I embarked on an exciting and life-changing journey. I began my second marriage with a memorable honeymoon in Puerto Rico. We went for long, romantic walks on the beach, inhaled the tropical ambiance, and embraced beneath the sultry sun. I felt strong and healthy and happier than I had been in years.
When we returned to Brooklyn, I had a routine appointment with my doctor. He told me he had some bad news. I had a fatal disease. This esoteric illness was progressive. Over the next few years or sooner, I would become very ill and die a painful death. There were some treatments. But none were effective. And if I underwent these treatments, most likely I would suffer a lot. I wanted to ask him, what do I do? I said nothing. I went home to my bride and waited to die.
A few years later, I took a leave of absence from work and began the daily treatments. These treatments were brutal. I became the living dead isolated from the outside world and alienated from my joyous self. I thought I would die from the treatments. I didn’t. But something else happened. After several months of Hell, I was cured!
Cured? I didn’t believe it. My primary care physician didn’t believe it. Yet the specialist confirmed that I was cured.
Years have passed. I’ve been tested and retested many times. Miraculously, I’m cured. I’m a survivor. Why me? Why me and not them?
I’ve tried to make sense of this. I’ve suffered from survivor’s guilt at times. Why? Do I deserve to live? Did the others deserve to die? Is it simply a matter of chance, the roll of the dice?
Like you, Sandy, I’ve learned to cherish the moment. I try to live in it as often as possible. Sometimes I get sidetracked by future goals or heartrending memories. But I keep trying. And I write! I love to write. Writing is my joy and my salvation. It’s my lifesaver!