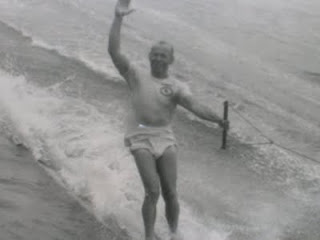 What do you do when you’re in the middle of an ultrasound and the technician is brought to tears by what she sees in your organs? That’s what happened to me last week at the University of Miami, now upgraded to a major university teaching hospital. It’s staffed by highly experienced pros, cherry-picked from across the country.

When Jenny’s tears started to well up, I tried not to look. You lay there, very still. You say nothing. But you start to wonder…is this the worst she’s seen? This week? This month? Ever? It’s the Mother of all reality checks.

And it’s part of a sort of twisted social etiquette that comes with life-threatening illness. The best analogy is Air Crash Hysteria. Passengers look out to see an engine or even a whole wing on fire. The worse they feel it is, the more likely they are to do what I did—sit still. Say nothing. The threat of embarrassment sometimes trumps life.

I don’t know if they’ve identified the chromosome that controls this, but it sure feels instinctive. And it’s an extra burden for patients. It’s not enough that we must waver back and forth between life and death (in our minds, apart from our bodies). We’re expected, or believe we’re expected, to do it with some style.

My father, Joe, was a larger-than-life character with European charm. He was socially adept and vigorous and loved to play to the crowd. When he’d get a local traffic ticket, he’d actually invite all in his friends to the local magistrate’s court to watch him star as the often successful amateur defense attorney.

When he was suddenly diagnosed with cancer of the pancreas at 60, it was considered the cancer with the highest mortality rate and amongst the most painful. What happens to European charm then? Almost 40 years ago, the same unwritten code of conduct kicked in for my father as it did during my ultrasound.

In addition to the outright pain, pancreatic cancer makes eating almost impossible. In the final stages, you are dying as much as anything from malnutrition.

But human instinct often motivates loved ones to express care and concern through offerings of food. My mother-in-law, God bless her, cherished my father and her special recipe potato soup, straight from the Old Country. She brought pots of it to my father, as his weight nearly halved from 155. She seemed oblivious to this. It was his job to praise the soup lavishly and regularly, when he could not hold down a spoonful. An earnest, compassionate woman wanted so badly to help.

These natural reactions often mean it’s the patient who’s left to help the family cope. (Doctors often won’t—when we got my father’s terminal diagnosis we asked his doctor far in advance to alert us when we were nearing the final stage—he never said a word.) This extra role for the sick can be hard work. Even on good days.

Having more often been patient than on-looker, I try to encourage families to keep their equilibrium. After all, the patient knows how every inch of his body feels, better than any test. Most pain is now controllable. But the concerned loved ones can only imagine. And invariably they imagine the worst—far worse than the patient is experiencing. Few of us can block this kind of neurosis when it’s someone we really care about.

So those of us at the center of these events sometimes feel a sort of obligation to cheer up their fan base. Who knows why? Other species go quietly off alone at the end; we tend to draw a crowd. Yet even then, there remains an invisible barrier between the infirm and the “normal people”.

In a sense, we are taking a journey alone, but it’s often with more on-lookers than we used to see in a week.

Sandy Prisant, who has lived and worked as a management consultant in Barcelona, Israel and other parts of the world, is waiting for a kidney and heart transplant. His series, "The Journey We Take Alone," began in March. Part Nine ran on Tuesday, June 21, 2011. Part Eight, which ran on Sunday, June 12, 2011, has links to all previous posts in the series. PIctured above is Sandy's father.
Posted by Claudia R at Friday, June 24, 2011

When confronted with a life-threatening illness, I believe that one is existentially alone. Even when the sick person is fortunate to be surrounded by loving family members, he or she is trapped inside a diseased body. It’s a very lonely place to live in, a dreamscape of darkness and emptiness. I know. I’ve been there. I’ve conquered killer-diseases only to find myself confronted with new medical challenges.
I don’t know if any human being can help me in my darkest moments. Of course, being surrounded by people who love me helps. I’ve been struggling with my faith for years. I’ve wavered between a strong faith and agnosticism/atheism for years. My spiritual self oscillated in a pendulum of anguish and joy. In recent years, my search for G-d has given me some comfort. I don’t know that He’s out there or inside. But I have wondrous conversations with Him. Is it He? Perhaps, I am talking to an imaginary Higher Power within my psyche and spirit. At times, I leap into the Void where I experience an excruciating emptiness. Alone, I feel desperately alone and hungry for G-d to fill me up. And then I pray. Covered in silence, I pray. Even if He does not exist, I must pray.
Sandy, you watched the ultrasound technician begin to shed tears and you looked away. You said nothing. But you wondered… How ill am I?
How should you feel? How do you feel? How does one feel when confronted with death? Each person is a separate universe with unique experiences, thoughts, emotions, perceptions and interpretations, religious and spiritual beliefs, attitudes, and world views. Is the world a safe or dangerous place? Can you trust the universe that it will support and protect you? Does G-d exist? Is He a loving G-d? Are people good or evil? Can you trust others? Can you trust yourself?
When confronted with my mortality, I suppose I’ve experienced a gamut of emotions-terror, fear, denial, depression, hopelessness, and rage. I am not naturally a man of courage. Yet I’ve learned to plant the seeds of courage in my psyche. With baby steps, I’ve learned to act courageously even when I felt frightened and wanted to withdraw. At times, my heart may pound ferociously, but I can summon my higher self. And with imagination and a strong will, I can pretend and act like a brave man. Practice makes perfect and if I act like a brave man again and again, I believe I will become a man of courage.
I guess what I’m saying is that the crowd is watching and waiting. You’re sick but you need to put on a show for all who have come to be with you. You’ve got your wife and others who love you. And now it’s almost show time. What will help you get through the night? My best guess is that you need faith in G-d or in your higher self. And that faith will help you let go. And when you do, well the sky’s the limit. You might just win the spiritual lottery. And wouldn’t that be grand?