And Now as Police Arrest 700 on the Brooklyn Bridge ARE we looking at the "American Fall?" 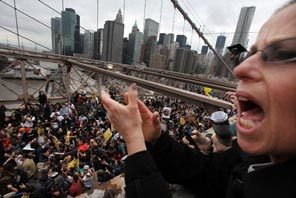 When it started just a few weeks ago, the Occupy Wall Street movement was largely dismissed by the mainstream media.

A bunch of "kids" had taken over a park in the financial district of Manhattan. Inspired by the Arab spring uprisings in Egypt and elsewhere, the protesters were calling out to the world to "end the monied corruption of our [American] democracy." But what exactly were their demands? Some media accounts portrayed the protest as silly, focusing on the kids who took off their clothes or wore funny hats. The group was faulted for having no unified message.

But the protesters have a different story to tell. According to the New York Times account, "many protesters said they believed the police had tricked them, allowing them onto the bridge, and even escorting them partway across, only to trap them in orange netting after hundreds had entered."

“The cops watched and did nothing, indeed, seemed to guide us onto the roadway,” said Jesse A. Myerson, a media coordinator for Occupy Wall Street who marched but was not arrested. A video on YouTube shows the incident.

Frustration in the U.S. over the economy is growing more and more widespread. We are headed into another presidential election cycle with little hope that any candidate really offers a way out of the mess we're in. A generation of young people has come of age to face unemployment figures that show no signs of turning around. Is it any wonder that the protest is quickly gaining steam and that the media now seems to be taking Occupy Wall Street more seriously?

Protesters are using what they call a "human microphone" system to broadcast messages during protests. One person speaks, and the crowd picks up the message and shouts it out to the rest of the group. And if you listen to what the protesters are saying, they are voicing the anger, frustration and despair that so many of us feel.

One young man who joined the protest in Manhattan -- he works as a cook in Columbus Ohio -- put it this way: "we want to end corporate personhood and the unequal influence that corporations have in politics...we want to give a voice back to the people, the majority of people don't have a voice and a small amount of corporations who have all the money have a voice right now so we want to change that..."

On the New York Times' opinion page, columnist Nicholas Kristof is still saying that Occupy Wall Street's "sloganeering" is "pretty silly." But he's also taking the protest seriously enough to offer a list of demands that he thinks the group should adopt as they demand changes in the financial system.

The Huffington Post quotes Jones as saying: "There's a generation of Americans who are looking around and saying 'What is the American Dream going to look like for me?' They're going to be standing up."

"You are going to see an American Fall, an American Autumn, just like we saw the Arab Spring."
Posted by Claudia R at Sunday, October 02, 2011