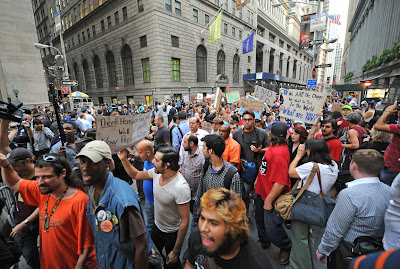 Is it any wonder that the Wall Street occupation is capturing the country's attention? Who among us isn't deeply frustrated and fearful and just plain fed up? The fact is, everyone has had it with the recession that's never gone away. There's no end in sight to the housing crisis or to our record levels of unemployment. Too many people just don't have jobs, nor do they have any confidence or hope of getting reemployed in the future. It feels like everywhere you turn, the news is pitiful.

Meanwhile, government is in perpetual gridlock. Cynicism seems only too reasonable: too often legislators talk a good game when they are running. But then they get into office, and everything just stays the same.

Three years ago, the nation went to the polls amidst a wild outpouring of support for a silver-tongued man who seemed capable of making a real difference in the White House. He was elected by record numbers of first-time voters and with a giddy enthusiasm from young and old people alike -- we hadn't seen the likes of it in decades. The country seemed poised on the edge of a new progressive era.

Soon enough, though, it became clear that was all an illusion. What was that Obama used to say about hope? Hard to remember. Obama went back and forth -- one day standing up to the banks and insurance companies -- the next day giving in to the big money that's captured both political parties. Some of us feel like such demoralized dopes for believing that a candidate could really act tough against corporate money.

Like the rest of us, the "kids" are rather desperate, and looking for hope. They represent a generation that faces a dismal, if not completely hopeless, job market. Sure, there is theater and theatrics in the occupation, but at heart, the protesters are saying very serious things, things that everyone should already know: that the economic and political systems in this country are broken and profoundly unfair and flawed at their very heart.

The protesters have been criticized for not articulating their demands, but if you ask any of them why they are there, they are pretty damn clear in delivering a coherent and compelling message. They articulate what everybody knows to be true: too often, it's the big bucks corporations -- now regarded under the law as individuals entitled to free speech and other human rights -- that dictate law-making and governing in this country. It's the big banks, the big insurance companies, the big stockbrokers, etc. etc. who call the shots, and who have got Congress' and the president's ear.

Corporations wield way too much power and steer our country, while the rest of us are powerless. We sit back and suffer the consequences.

So now what? While the protest stirs up at Wall Street's doorstep, the only meaningful way to fix the system is to initiate serious campaign finance reform at all levels of government. In other words, we must institute changes that will enable us to elect individuals who are not beholden to large corporate interests.

Is that possible? Is there a set of legislators out there ready to lead the fight to bring fundamental reform to the way we elect our leaders? And if so, might it be time for them to step forward to lead the protesters toward this constructive change?
Posted by Claudia R at Thursday, October 06, 2011