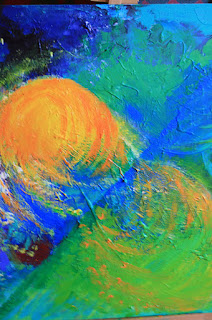 I remember when I was little, after hours of running around the neighborhood and when I was too tired to move, I would lie down in our backyard lawn and just gaze into the golden lazy afternoon sky.

I found myself in awe every day, no matter what the weather was like. The majestic sky washed in varying palettes of color, the clouds shaped like lions to the ones shaped like lambs being reflected in different hues. And I would see a flash of golden light against a perfectly white fluffy cloud that would make my eyes squint. And out of nowhere , for no good reason that I can think of now, I would feel this exhilarated thrill as at that moment with all of my young, naive heart I believed that I had just seen God. I would run back to the house to tell my grandmother about it. She would listen to me and look at me with bewilderment for quite a while and then compose herself and then try to make me understand lovingly that I had seen nothing unusual. But I believed that I had seen God with all the spirit in my little heart and no one was going to tell me otherwise.

The simplest way of defining belief or faith in something is probably by saying that it is the acceptance of something which we imagine to be true, that which we cannot prove nor feel the need to try to prove. As I see it, faith is ubiquitous. Our specific methods of interpreting it are arbitrary. Some of us pray to Jesus, some of us go to Mecca and some of us spend decades peering through a microscope trying to find God in science. \

In the end we are all searching for truth. Truth that is greater than ourselves, truth that proclaims that our lives are not meaningless, that we haven’t gone through our entire lives doing the right things and steering clear of temptations for no consequences or rewards. But more than that, I think we are scared of the state of non-existence. We are scared that if God doesn’t exist there is no life after death, which means after we die we will all just cease to exist. All that we have done in this world, believed and valued has no significance anymore. That we are of no significance anymore. I think for some of us that is more petrifying than the concept of burning in hell.

In today’s world, skepticism has become a virtue. Cynicism and demand for proof have become enlightened thought. Which is why humans today feeling more depressed and defeated than they have at any point in human history. Some people can actually bend forward and ask that if there is a God then why are human beings subject to such sufferings throughout the world. I don’t know the answer to that but what I do know is that the reason I choose to believe in a superior power is because it makes me feel safe. We humans are so fragile and vulnerable to our surroundings. The universe can make us perish in a second before we even realize that we are in danger. So if I believe in a superior power that will help me in circumstances that are beyond my capacity to prevail over them. I get a sense of security and confidence from my faith that helps me concentrate on things that I have the capability of handling.

I experienced this very early in my life. Whenever I had to do something important and I was nervous and had pressure on me, I would just imagine Allah looking down on me and I could feel a stream of energy or some kind of power infusing my veins. And I knew that now I could vanquish anything. That now by His grace I could conquer all my fears and show the world my true potentials.

When we as a species abandon our trust in a power greater than us, we abandon our sense of accountability. All faiths are like reminders that there is something we cannot understand, something to which we are accountable. With faith we are accountable to each other, to ourselves, and to a higher truth. Religion is flawed, but only because man is flawed. A lot of people stubbornly try to find holes in religion by construing it with disrespect and ignorance. They should understand that every faith in the world is based on fabrication.

Every religion describes God through metaphor, 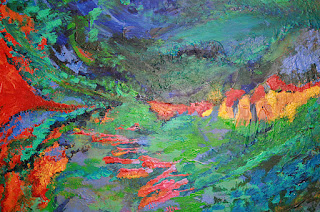 allegory and exaggeration. Buddhists don’t have to be told that Buddha did not come from a lotus blossom. Or that Jesus was not born of a literal virgin birth. Or that Mohammed didn’t fly on a flying carpet to heaven to receive the Qurran from Allah. Those who truly understand their faiths understand the stories are metaphorical and can contemplate the greater meaning in them.

I am not saying that I believe that there is an old man with a white beard and white overalls sitting in his empire of gold in heaven, eating grapes off a bunch and He is smiling down on us all as we try to comprehend Him. Not maybe that. But I do believe that there is this source of positive energy that has created this universe and that everything in this universe can relate to it on some yet incomprehensible level. I value science with all of my being and I believe that everything that exists can be broken down into its logical components and explained scientifically, even God. Science and religion are not at odds, science is simply too young to understand.

That is why I want to study nano science and try to understand everything related to theology on the deepest level possible. I want to decipher the secrets behind all these that we don’t understand.Because at the end of the day we are all looking for the same truth. The truth about our universe, us and our purpose.

Writer Bosra Farha grew up in Bangladesh and came to the United States two years ago to start her junior year of high school in Queens. She was primarily home schooled in English but during her freshman and sophomore years of high school she attended a school with a British curriculum in Bangladesh. Currently she is a freshman at the University at Albany, State University of New York, where her major is biology and pre-med. She hopes to be admitted into the nano-technology program next year.

Love this piece! Thank you Bosra.