With the Wall Street Protest, We are in Uncharted Waters 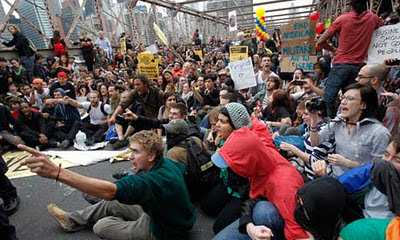 There is no precedent for the occupation of Wall Street. America has never engaged in class warfare. We consciously decided NOT to follow the British during the Industrial Revolution--when American Labor unions deliberately decided to be the only nation on earth to celebrate the working man in September, not on Labor Day;
when the Democrats decided not to become the Labor Party.

After all, why divide into classes when there was ubiquitous socio-economic mobility? But suddenly that is gone. Suddenly we have the severe economic inequality of 1910. That's right, 1910. The whole middle class advance, post World War II, has been wiped away in a decade.

The unsurprising result: only 20% of the nation believe there is an upwardly mobile future--for themselves or the country. Americans are beginning to take stock. And take sides.

Before now, references to rich and poor were simply occasional throwaway lines in political bombast. Now they are the crude labels around which society is coalescing and dividing.

If you doubt it, read yesterday's statement from Vice President Biden. To the best of my memory, no one form the White House--certainly not in the depths of the Great Depression--ever made a public statement like this. We are entering uncharted waters.

for a radical overhaul of U.S. institutions and government, saying the American system has run amok and is no longer fair for the vast majority of Americans.

Asked if he and President Obama stood in solidarity with protesters in lower Manhattan,Biden said it was a "really fair question" and then did not directly answer it.

"What is the core of that protest?" Biden asked rhetorically. "The core is the American people do not think the system is fair or on the level."

The vice president noted that the conservative Tea Party wing of the Republican party emerged from anger at President George W. Bush's bailout of the financial system three years ago and many Americans from the opposite side of the political spectrum are feeling that same anger toward the banks

"Look guys the bargain is not on the level anymore in the minds of the vast majority of the American (people) the middle class has been screwed," Biden said.

He cited the public outrage over a recent decision by Bank of America to impose a $5 fee for consumers to use their debit card demonstrates that anger.

Biden said "The American people know... the reason the CEO of the Bank of America" is still in business is because "the guy making $50,000 bucks bailed him out. Bailed him out."

Bank of America is "incredibly tone deaf at a minimum. At a maximum, they are not, they are not, paying their fair share of the bargain here. And middle class people are getting screwed," Biden said.

Writer Alexander "Sandy" Prisant, formerly a management consultant who worked in many parts of the world, lives in Florida with his wife, Susan. He is writing a series called "The Journey We Take Alone?" on MyStoryLives, a project that deals with the life-threatening illness he is facing. Today's post appeared first on his blog, Wordsmith Wars.
Posted by Claudia R at Sunday, October 09, 2011