Stuck in an Elevator -- Please, Let me Live On the First Floor! 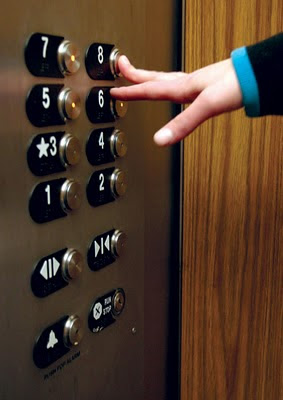 Everyone has fears and most of the time, people say, “Face your fears.”

If I’m scared of something I stay as far as I can away from it. One fear I have is elevators, but since I live on the 13th floor in Mohawk Tower on the SUNY campus, I can’t stay away from the elevator.

When I was first assigned my room on the 13th floor, I kept telling myself I would take the stairs up now and then, but somehow I never do. I never really thought that I would get stuck in the elevator. But then one day, it happened.

I, Lexus L. Ulter, got stuck in the elevator.

I remember it like it was yesterday, why? because it WAS yesterday! It was nine o’ clock in the morning and I still had 10 minutes to get to class. It was a day like no other; I woke up on time, took a shower, brushed my teeth and got dressed. Before I left I sprayed a little perfume on me -- it smelled like baby powder. As I waited, I thought about being late to class. I could get marked absent and I didn’t want that to happen, so I pushed the elevator button a second time, as if that somehow would make it come faster. It didn’t.

That’s when I realized that I was officially stuck in the elevator. I was so pissed off because one, I’m terrified of elevators and two, I didn’t have service to call someone and tell them I was going to be late to class because I was stuck in the elevator. Three girls that didn’t know each other were stuck in an elevator with no escape.

I turned to look at the other two girls. I could almost smell the fear from them; they were as scared as me. The air in the elevator felt as if it was getting thinner every minute. I started to feel as if I could barely breathe. The alarm made me feel more scared than ever, I wished it would turn off but it never did. I recalled something scary my uncle had once told me, “An elevator will never drop unless the wire is cut. Aside from that, it will only shoot up.” Who wouldn’t be scared by that?

One of the girls panicked. So just kept pressing the alarm button as many times as she could, then she started to try to read the directions for “If You Get Stuck in The Elevator.” We all squinted to try to read it but we couldn't because some idiot had scratched the paper up.

We pressed the “Call” button and we heard ringing, then someone picked up, but we couldn’t hear a word they said, because the stupid alarm wouldn’t shut up. So we yelled. We yelled, “WE ARE STUCK IN THE MOHAWK TOWER ELEVATOR AND WE ARE ON THE FIRST FLOOR!!”

The person on the other end sounded like they were mumbling something and hung up. We thought we were screwed. We started a little conversation; we all introduced ourselves and told each other we would always remember each other. The girl who wasn’t panicking called 911. She told them where we were and they said they were on their way.

Ten minutes went by and we were still waiting, waiting for someone to save us. I didn’t want to die in an elevator, that would be horrible and honestly I wasn’t ready to die at that moment. I just kept thinking about my family and my boyfriend, I missed them and didn’t want to be separated from them so soon in my life.

One thing that also went through my mind was the time I had gotten stuck in the elevator once before. It was about a year ago and I was with my older sister. That was the most traumatizing experience of my life.

All of a sudden, we started to hear banging. We all jumped from the first bang and moved next to each other on the wall away from the door. The person on the other side started to yell to us, but once again, the dumb alarm was going off. We could hear them a little, so we started to do as they told us. We pushed the door together, and then there were a few more bangs.

Finally, the doors opened and I ran out first. I didn’t cry which surprised me since I felt like I would. I couldn’t believe that the girl who called “911” got in trouble for it, but I was just happy to be alive.

The happiness didn’t last long, though, because I remembered, I still had class. I ran to class thinking my teacher would probably mark me absent. Once I got to the physics building, I ran inside to see my classmates sitting in the hallway. My teacher hadn't even arrived yet. All I could say was “WOW.”

Ever since that day, I haven’t stepped foot in the middle elevator. I just don’t trust it at all. If I push the elevator button and that one comes, I wait for the next one. On my application for housing next semester, I will write, “I want to live on a floor below eight and above two, please and thank you.”

Lexus Ulter is a freshman at the University at Albany, State University of New York. She grew up in Washington Heights and graduated from Riverdale Kingsbridge Academy in the Bronx. She is considering majoring in sociology or social welfare.
Posted by Claudia R at Tuesday, October 04, 2011