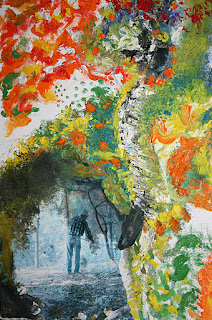 “The person you have dialed is unable to receive calls at this time,” said an automated voice.

I slammed the phone and redialed the number. It seemed as if the world was working to torment me with every task at hand.

Laughing, I thought about the rollercoaster I call life. Please pick up, I thought. Nothing mattered but the voice on the other end of the line -- it seemed to be coming from the other side of the earth. As the phone rang endlessly, a student worker approached me and smiled a crooked smile. I was not in the mood to smile.

I stared daggers at her—I guess she got the hint as she spun on her heels. If I wanted help I would ask for it.

“Your father died...” said my mother. “But the doctors brought him back; he’s not breathing on his own. He has a machine keeping him alive. He’ll be fine, Darren, we have to pray.”

Pray? To whom should I be praying —God? He does not exist for me. I have never felt his presence. For all I know he could be a fictitious character created by a crafted writer. I can’t rely on an invisible man for all the answers, at least not yet. I hung up the phone and I walked away. I felt numb and empty. This feeling was all too familiar to me when I rid myself of emotions.

It helps me to temporarily escape—even permanently at times. Escape into a world where nothing matters, and each reaction is either forced or controlled. As I walked from the university complex, I realized that I felt nothing and that angered me more than it had before.

Still, I did not show it—it wasn’t me. I wore a mask of indifference. He’s your father, I thought.

Saying that hit me. The mask had cracked, revealing old scars and new bruises.

The mixture of emotions came flooding in, and it hurt more than I could possibly say. I thought this feeling would forever be foreign to me. I felt broken, lost, sad, deeply depressed, and oddly in the mood for mischief. I wanted to hurt myself, but I knew what my father would say: Never let someone have that power over you, not even me.

My throat tightened and my eyes began to water but I could not cry, at least not on the surface. Instead of crying I began laughing to myself, not at the situation at hand, but at my inability at times to express my inner feelings. I laugh in order to hide my real feelings—just like my father.

Darren Coleman, a student at the University at Albany, SUNY, grew up in New Jersey and New York. He attended the Monroe Academy for Visual Arts and Design. One day he hopes to become a successful novelist.
Posted by Claudia R at Saturday, October 22, 2011